The pilgrim's staff on the Way of St. James 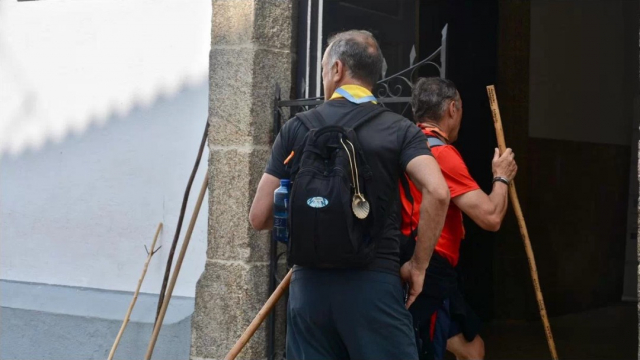 What is the staff of the Way of St. James?

Among the most emblematic symbols of the Camino de Santiago, the staff is one of the most important. Many pilgrims use a staff along each stage, something that has been happening for hundreds of years.
The staff is a large stick that pilgrims useas a support during their journey. They come in various sizes and are made of wood. Nowadays it is usually decorated with the classic scallop shell and the Camino de Santiago pumpkin, as well as a rope to facilitate the pilgrims' grip.

The word "bourdon" comes from Old French, more specifically from the word "bourdon". This word referred to a kind of spear, something that was transferred to this symbol of the Camino due to its large size.
Hundreds of years ago, pilgrims began to use some kind of support to make the journey to the Cathedral of Santiago as comfortable as possible. On the one hand, they began to carry a gourd where they kept the water they used to hydrate themselves. On the other hand, they began to use long wooden sticks as support to make the way much lighter, besides being basic to defend themselves and overcome different obstacles.

Why is the staff a symbol of the Camino de Santiago?

In addition to being a very common element among pilgrims for years, the Codex Calixtinus itself names the staff as one of the symbols of the Camino. The Codex mentions that the staff is the third foot of the pilgrim and that it is a basic element for his safety, taking into account that at that time pilgrims could be attacked by all kinds of animals.
Activity