The Gothic Art of the Camino de Santiago

Here are some of the most remarkable Gothic buildings in the Iberian Peninsula that you can see while walking the Camino de Santiago. 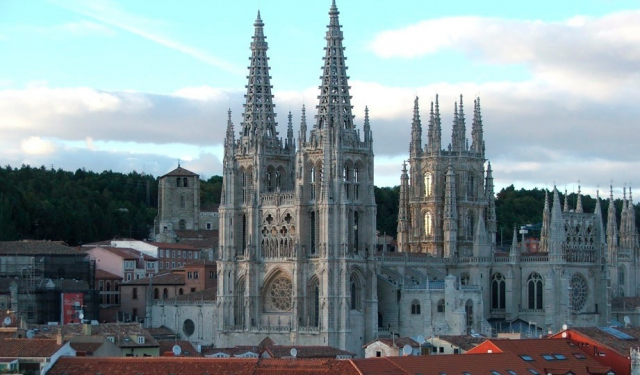 What is Gothic art?

Gothic art is an artistic style that was born in Europe in the middle of the 12th century. This style influenced at the architectural level, but also in the art of sculpture and painting, until the arrival of the Renaissance. It was born exactly in the north of France, and the basilica of Saint-Denis, near Paris, is taken as a reference.
Although this artistic style was present for many centuries, there were many people who rejected it. This type of art is attributed to the barbarian tribes, so several artists disowned it, pointing out that it was ugly and did not respect the classical patterns.
Among the main characteristics of this art, we can highlight the use of pointed pointed arches, extravagant shapes and the use of bright materials and vivid colors. This was the style used to create many of the most important religious buildings in our country, such as cathedrals and monasteries.

What is the relationship between Gothic art and the Camino de Santiago?

Gothic art has a great influence on the Camino de Santiago, leaving with it several important monuments that pilgrims can enjoy. Regardless of the Jacobean route in which we find ourselves, we can find several historical buildings that were built under the influence of this artistic style, some of them being the most representative of each city.
This artistic style was born very close to the Camino de Santiago and that is why it was key to its development. It is for this reason that we can find Gothic buildings in the main cities of the Camino de Santiago, highlighting numerous cathedrals and churches in the northern half of the peninsula.
Most of these Gothic buildings are located in the most important Jacobean routes such as the French and Northern Ways, however, we can find references of this style in any Jacobean route.

Below we will show you some examples of buildings belonging to Gothic art that can be found in different Spanish communities. There are many more Gothic buildings throughout the Peninsula, however here we mention some of the most remarkable ones in the communities through which the Pilgrims' Route to Santiago de Compostela passes.

Most of the buildings of Gothic influence located in Galicia are convents and cathedrals. The Cathedral of Santiago de Compostela predates this artistic style, however many other religious buildings were already built based on the canon of the Gothic style.

Gothic art in the Basque Country

The Basque Country is one of the communities in which we can find more Gothic influence. Within the city of Bilbao we find several buildings built under this artistic style, as in the rest of the Basque territory.

Gothic art did not have so much influence in the Principality of Asturias, however it did leave several important buildings. The most remarkable is the Cathedral of Oviedo, located in the capital, which is the most important Gothic work of this autonomous community.
In the community of Navarre we find several Gothic buildings of great importance for the Pilgrim's Way to Santiago de Compostela. One of the most important is the Cathedral of Pamplona, where the French Way crosses, as well as the Royal Collegiate Church of Roncesvalles, from where many pilgrims set out on their way to Santiago.

In Castilla y León we find many important buildings of Gothic art. This community has some of the most outstanding religious buildings of this artistic style, which are mainly cathedrals.
Activity