The French Way crosses the province of La Rioja on its way through the stage that goes from Logroño to Nájera. The route passes through a historic center with a clear jacobean past, Navarrete. It has several points of interest with a lot of historical value. This is the case of the Church of Our Lady of the Assumption, which was declared an Asset of Cultural Interest in 2020.

The architecture of the church of Our Lady of the Assumption

This parish church was built between the 16th and 17th centuries, so it falls under the Renaissance architectural style, although it also has Baroque elements. A renowned architect, Juan de Vallejo, participated in its construction. He was the main master of the Burgos cathedral, and proposed some pioneering architectural solutions in La Rioja. Its construction begins in 1533, and was not completed until 1645.

It has a Renaissance façade and three naves of different heights, all covered with ribbed vaults. In addition, there are several side chapels that stand out for their unconventional Corinthian columns and their barrel and oven vaults.

Altarpiece of the church, image from Wikimedia Commons

The altarpiece of the church

What stands out most about this church, however, is inside. The church of Nuestra Señora de la Asunción de Navarrete contains a Baroque altarpiece from the end of the 17th century. From the floor to the ceiling of the apse, the main altar is covered with golden reliefs and polychrome figures. This altarpiece is unique, due to its age and size.

This church has a great historical and cultural value, also emphasized by its excellent state of conservation. It is a fundamental visit when crossing the walls of Navarrete, to learn about the importance of this town during the Modern Age.

The weather in Navarrete 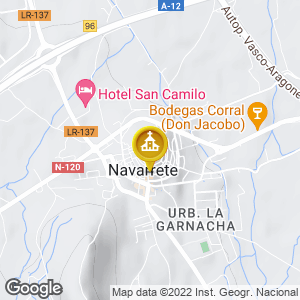