We only discover purely Romanesque art in the northern part of the Iberian Peninsula thanks to the pilgrimage, which has in the French Way its maximum example. 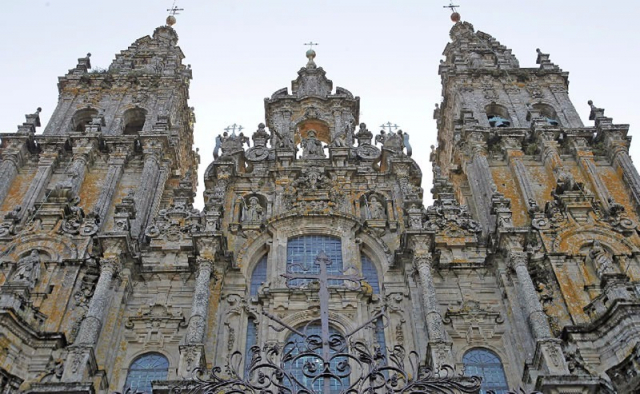 What is Romanesque art?

Romanesque art took place between the 11th, 12th and part of the 13th centuries. It was the first artistic style defined as Christian and European that brought together the different characteristics used in the early Middle Ages. It succeeded in creating a unique language applicable to all later forms of artistic expression, but it is not the product of a single nationality or region. Romanesque art appeared gradually in Spain, France, Italy and Germany, and has its own peculiarities in each of the countries because it emerged simultaneously.

Its origins are the result of the growth of economies, pilgrimage and spiritual renewal with the expansion of religious orders, which together inspired the construction of numerous buildings and churches. Romanesque art is, in short, a doctrinal art that mixes very different currents and reflects the clear values of the new feudal society, the political system prevailing in Western Europe in the central centuries of the Middle Ages.

What is the relationship between Romanesque art and the Camino de Santiago?

The Camino de Santiago has an enormous historical, cultural and artistic heritage. Over the centuries, millions of pilgrims have left their footprints along the different routes that lead to the Galician capital, the French Way being one of the busiest and most important routes in the West.

Due to its imposing legacy, movements that developed in Europe have been imprinted with all kinds of civil, religious and military works. And there is no doubt that Romanesque art is one of the main exponents of the Camino de Santiago. It is an artistic current that flows through different Spanish provinces by means of the French Way, where we find constructions and monuments of this architectural style.

We only discover purely Romanesque art in the northern part of the Iberian Peninsula thanks to the pilgrimage, which has in the French Way its maximum example. Centuries later this artistic model was promoted towards the south, but in these cases it merged with other types of styles such as Gothic and Mudejar.

Romanesque architecture on the French Route

The French Way is, without a doubt, one of the most famous and popular routes of the Camino de Santiago due to its historical privilege of running from Roncesvalles to the Cathedral of Santiago itself. Its traces date back to the ninth century shortly after the discovery of the remains of the Apostle, and among them we find iconic places that welcome one of the predominant artistic currents in Western Europe during the eleventh and twelfth centuries and part of the thirteenth.

Throughout the French Way are manifested features of great artistic and architectural value. Pilgrims can discover through the rugged Pyrenees, the fortified villages of Navarra, the wine region of La Rioja, the hard and silent Castilian plateau or the green Galicia, countless samples of the best Romanesque art on the Camino de Santiago.

Catalonia is the cradle of one of the first models of Romanesque art in Spain. Little by little, the artistic current spread throughout the peninsula until it reached Santiago de Compostela. The French Route has a large number of examples of this style in its different stages. From Aragon to Galicia, these are the main constructions with a clear influence of the expansion of Romanesque art in Spain.

The French Route through Aragon enters the north of the peninsula through the Pyrenees and passes through different stages among which it is impossible not to mention the Cathedral of Jaca as the greatest exponent of Romanesque art in the region. The Monastery of San Juan de la Peña, for its part, is one of the most outstanding monuments in the province of Huesca.

Navarra is one of the meeting points for pilgrims arriving from France and central Europe. Throughout the 7 stages that run along the French Route of Navarre, there are outstanding representatives of this artistic movement throughout the community, such as the Cathedral of Pamplona, the Bridge of the Queen, the Church of San Pedro de la Rúa, the Palace of the Kings or Our Lady of Rocamador.

Following the French Way, pilgrims reach La Rioja, a province where some of the best Romanesque architecture can also be found. The Monastery of Santa María la Real in Nájera, the Cathedral of Santo Domingo de la Calzada and the Church of San Bartolomé are the greatest exponents of this artistic current.

Adjacent to the north of Portugal and to the east of Galicia, we discover Castilla y León. The province is one of the most important cities because it crosses the Vía de la Plata, but also because it has some Romanesque art works of great value such as the Basilica of San Isidoro, the Monastery of San Juan de Ortega or the Church of San Martín de Tours.

The best example of Romanesque art is undoubtedly the Cathedral of Santiago de Compostela. Pilgrims walk a long way to reach one of the most beautiful cathedrals in the world, but they also cross other points of interest related to the style, such as the Collegiate Church of Santa María del Sar or the Church of Santa Mariña de Sarria.