In San Vicente de la Barquera we can find several emblematic places such as the Puente de la Maza, as well as the Church of Santa María de los Ángeles. This religious monument of classic Gothic style is located in one of the highest areas of this Cantabrian town, being one of the most striking points within the old town.

Built between the 13th and 16th centuries, the Church of Santa María de los Ángeles receives thousands of tourists every year. Inside it houses one of the most outstanding funerary sculptures in the whole country, the tomb of the Inquisitor Antonio del Corro, a nobleman and religious man of the sixteenth century. It also highlights its baroque altarpiece, the work of Pedro de la Puente Tolnado and Simón de Haro.

A historic church that stands out for its majesty.

In addition to its great historical value, the majesty of this building makes it one of the key points of San Vicente de la Barquera. Its large dimensions are a reflection of the most important years of the development of this city, in which it enjoyed a great economic level. To this we must add that it was built on top of a rocky spur, something that makes it a landmark for anyone who travels to this town.

Although the Church of Santa María de los Ángeles is located in the community of Cantabria, it is one of the key points for pilgrims on the Camino del Norte. Pilgrims traveling the road from Comillas to Colombres have to cross through the town of San Vicente de la Barquera, being able to enjoy this historic monument in the distance. 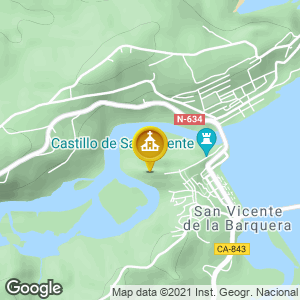