What is the Caminito del Rey? How to get there? 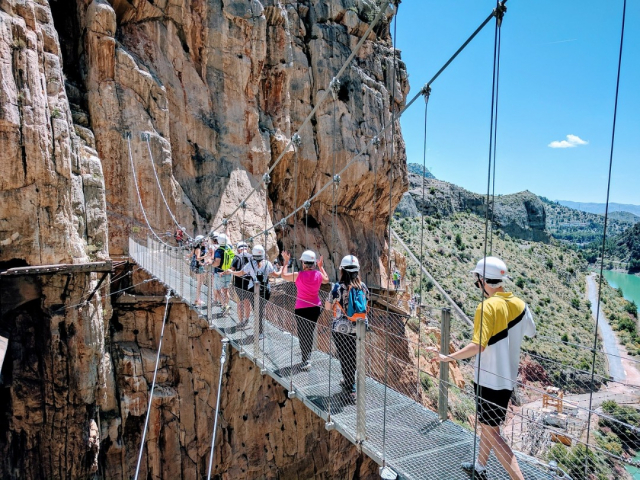 The Caminito del Rey is a very popular route that opts to be a UNESCO World Heritage Site. Although it may seem that this route is related to the Camino de Santiago, the answer is no, since it has no relationship with the Jacobean routes. The Caminito del Rey route was born with the aim of communicating the municipalities of Malaga with the Natural Park of the Desfiladero de los Gaitanes.

It originated between 1901 and 1905 thanks to those in charge of the Sociedad Hidroeléctrica del Chorro. Workers needed a way to get through the site and move construction material. Its path is in the Desfiladero de los Gaitanes itself, which groups the municipalities of Ardales, Álora and Antequera in Málaga (Andalusia).

The name refers to its origin. In 1921, King Alfonso XIII inaugurated the accesses between the Guadalhorce and Guadalteba reservoirs. The king had to cross the catwalk to get to the place where they were under construction. Since then, they began to call it the Caminito del Rey, a name that lasted to this day.

Why is it so popular?

After its construction it was years without maintenance, so the land was in very bad condition, without railings and with some areas with destroyed soil. However, this fact did not detract from its popularity, as it became famous among hikers. Its fame made it one of the most important areas for climbing in Europe.

One of the attractions of this route are the 3 km long walkways at more than 100 meters high. The road is located on a water channel with a width of just 1 meter, and has another 4 km of accesses. Although it is very popular, its dangerousness led to the death of 4 hikers during 1999 and 2000. Since then, the Junta de Andalucía decided to close its accesses to prevent more deaths, imposing fines of up to € 6,000.

In 2006, the Málaga Provincial Council and the Junta de Andalucía carried out a proposal to restore the Caminito del Rey. This request was launched in 2014, the year in which the works of its path began. After a year of construction, specifically on March 20, 2015, it was reopened to the public.

The Caminito del Rey has entrances and walkways. The access area has a distance of 4.8 km, while the footbridges (the best known) have a distance of 2.9 km. It is carried out in a single direction, from the north of Ardales to the south of El Chorro. The choice of this direction was to reduce the difficulty, since this way you walk downwards. The duration is approximately 3 or 4 hours, it depends on the pace of the walker. 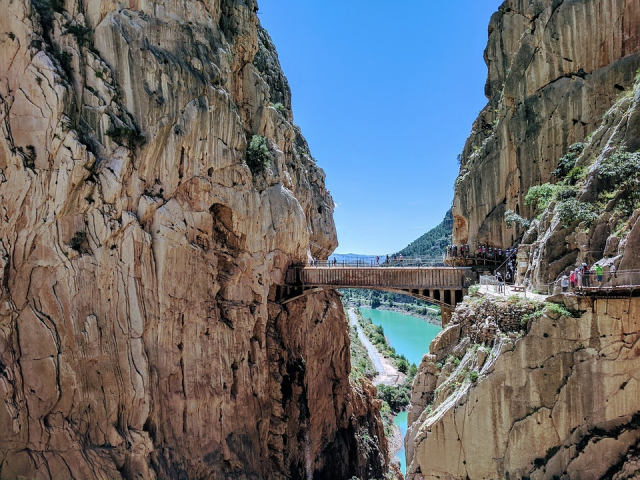 How to get to Caminito del Rey

The Caminito del Rey can be accessed from three different points.

Once we get to the area, the parking lot is far from the start of the route. It can be accessed from the north or south. The northern area is more accessible, however, it is further away than the southern area. Therefore, if you want to park closer, it is advisable to choose the southern area, since you will have the car closer.

Having chosen the southern area located in El Chorro, it takes an hour and a half to reach the beginning of the Caminito del Rey. You will have to wait for the lanzadera bus, once you get off the bus you must go through the tunnel next to the bar / restaurant "El Kiosko", finally you will arrive at the control booth where the visiting groups are formed. There you can enjoy the adventure and reserve your place on the official website of the Caminito del Rey.

Despierta tu Sentido Ibérico
How to get to León to start the Camino de Santiago
Camí de Sant Jaume or Catalan Way: Stages and Map
Hiking Routes in Galicia for lovers of the Way of St. James