One of the most popular locations within the municipality of Bermeo is the Casino. This building is the work of the architect Severino de Achúcarro, a popular architect from Bilbao who was very representative of the eclecticism period. The building that we all know is not the one that was originally built in 1894.
Although from its beginnings, the casino of Bermeo was a great architectural work, due to floods it collapsed in 1983. It was time later that a new building was rebuilt, based on the previous building located in the Lamera Park of this town of Biscay.
Since its construction, this building has been the center of various activities. It is currently used as an exhibition and conference hall, in addition to having a restaurant and other types of establishments in the rear area. The exhibition hall is known as the "Nestor Basterretxea" hall, which is divided into the 3 floors of the building.
Although the casino of Bermeo is a building of great architectural value by itself, there are several points of interest that we find in Bermeo. On one side is the Old Port of Bermeo, while on the other is San Juan de Gaztelugatxe, located on the outskirts.
Photos & videos
Activity

The weather in Bermeo 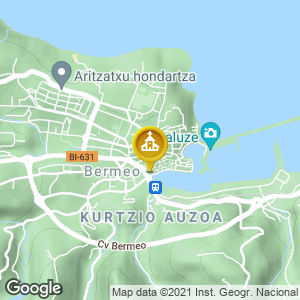