A single path with its departure point in Santiago and with its end goal at the Cape of Finisterre, the westernmost point of Europe and the Sanctuary of Virxe de Barca in Muxia. 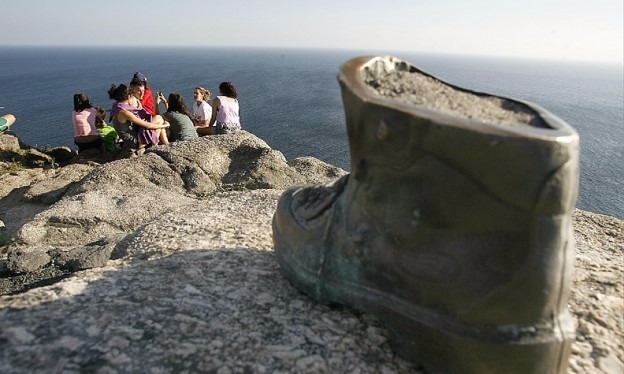 The Camino from Santiago to Finisterre

This is the only route with its origin in Santiago. The goal is either Fisterra (Finisterre) o Muxía, two places of great symbolism and with strong Jacobean connections. Previously these locations were known as the end of the world. Currently this is one of the routes with the most Jacobean rituals and one that attracts an increasing number of pilgrims. The Camino Santiago does not always end in Compostela. From the middle ages many pilgrims have decided to continue their pilgrimage to the place, which symbolised, until the end of the middle ages, the furthest corner of the world, the westernmost point of continental Europe, the final stretch of this symbolic and mythical itinerary which follows the trail marked by the milky way and which had its furthest star in Finisterre (anciently known as Finis Terrae-the end of terrain).

Pilgrimage to the end of the world

Since the Roman era the Cape of Finisterre has been known as a place full of all kinds of beliefs, related in many cases to the of the sun. According to tradition it is on this coast that the legendary Ara Solis is situated, the altar to worship the sun linked to ancient fertility rituals and the place where, every afternoon, the roman legions would go to watch the sun set over the sea. Legend claims that it was the Apostle whom rid this site of pagan worship to establish, in its place, the chapel of San Guillermo, it no longer exists. Another Jacobean link to Finisterre can be found in the famous Codex Calixtinus, the first guide to the pilgrimage of Santiago, which, in book III recalls how the disciples of the Apostle travelled to the city of Dugium-currently submerged-to ask the Roman governor for permission to bury the remains of their master in Compostela. The governor had them imprisoned. However, according to tradition, they managed to escape.

It is not just Finisterre that holds Jacobean tradition. Muxía with its majestic sanctuary of A Barca, an authentic stone monument situated at the waters edge, has also become an ending milestone for this route. In the middle ages there was an extended belief that the Virgin Mary had come to this place in a stone boat to provide encouragement to the apostle Santiago on his preaching mission through the northwest of the peninsular.

Success of the pilgrimage from the XIII century

It was in the XIII century when predominantly Finisterre became an important pilgrimage point in the Camino de Santiago. This was helped by the fact that the European courts of that time began to impose the completion of a pilgrimage to saintly and distant locations, often in poor conditions, as a punishment to some criminals. Finisterre and San Andrés de Teixido, also in the province of A Coruña, were two of these destinations chosen by the courts. The route saw a decline in pilgrims during the XVI century, however it has since gained popularity, especially during summer months.

Its main attraction is it ending at the sea front and on the Costa da Morte (the dead coast).  The itinerary towards the coast This route has few stages and passes through small rural hamlets like Negreira and Olveiroa, where it forks off in the direction of the coast. Those walkers wanting to reach Muxía should continue straight ahead while those travelling to Finisterre should turn left. The end goal of this Camino is not Muxía or Finisterre but rather, the sanctuary of A Barca and the cape of Finisterre, where it is customary for pilgrims to burn their shoes worn on this long Camino.

The itinerary also allows for a fifth stage, a visit both destinations, along a route of great beauty, which connects to both locations and serves as a just reward. There are directions for both destinations. Nowadays The growing number of hostels and the numerous information points for pilgrims helps to consolidate this ancient route of the Camino de Santiago. Disadvantages to this Camino are the long stretches without services and the length of some of the stages. Some pilgrims choose to begin the route at the coast and end in Santiago and others don’t think twice about continuing to Finisterre and returning once again, on foot, to Compostela. Buen Camino.