In the capital of the Basque Country, within the province of Vizcaya, is located the Basilica of Our Lady of Begoña. This religious building is a sanctuary in honor of the Mother of God of Begoña, patron saint of Vizcaya since 1903 and currently one of the most important in the religious field of this province. It was built from 1511 to 1621 and had a series of reconstructions due to the damages of some warlike acts like the first Carlist war.

Although the basilica of Begoña stands out for its imposing size, it is the result of an old primitive building with a single nave. It should be noted that the old building had a wooden portico, built with the same material as the roof of the nave, and a stone chapel that contained the virgin. It was from the 16th century onwards that the basilica that gives shape to the one known today was built, a construction that was not completed until the beginning of the 17th century.

Although the character of this building has always been religious, its surroundings have witnessed different nationally recognized conflicts. On the one hand, the aforementioned First Carlist War, which caused damage to the building, while on the other hand, the Second Carlist War, after which the tower collapsed over the vault of the nave, and the Begoña Events, a much more recent act of war.

The basilica of Begoña, one of the most emblematic points of Bilbao.

Along with other points of interest that we can find in Bilbao, the basilica of Begoña is one of the most striking buildings for tourists and pilgrims coming from the Camino del Norte. Every year thousands of tourists visit this emblematic building, as well as other places located in the capital of the Basque Country such as the Guggenheim Museum or the Cathedral of Santiago de Bilbao.

The weather in Bilbao 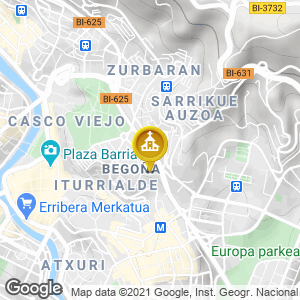