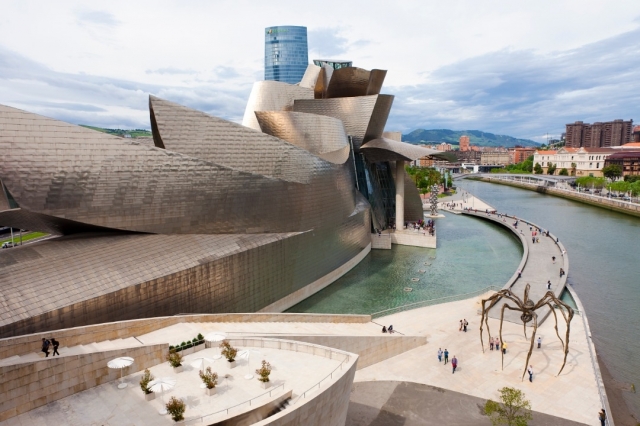 The Guggenheim Museum is a contemporary art museum located in Bilbao. This museum is one of the best known works of Frank Gehry, a Canadian-American architect, and has an area of 24.000 square meters of which 9.000 are dedicated to exhibitions. It was founded by King Juan Carlos I in October 1997 and belongs to the Solomon R. Guggenheim Foundation, which promotes modern art. Since its inauguration, more than 1.000.000 people visit it annually, which has meant an improvement in the economy and an increase in tourism in Bilbao.

It reflects the avant-garde style of the twentieth century

The highlight of the Guggenheim museum is its building. This architectural work reflects the most avant-garde style of the twentieth century and is an example of architecture thanks to its innovative design both for its exterior and its interior. It is designed with bright colors and wavy shapes without any geometric logic, which gives it a boat shape if viewed from the river and shaped like a flower seen from above.

Currently, the Guggenheim Museum hosts different exhibitions of the most prominent artists of recent decades, such as Yves Klein, Antoni Tàpies or Eduardo Chillida, as well as exhibitions of works created specifically for the museum itself and monographic montages. In addition, on some occasions the Guggenheim museum hosts other activities such as projections, conferences, concerts or festivals, among others.

The weather in Bilbao