Placed in the zone center of the city of Caceres we find el Arco de la Estrella one of the most emblematic places of this locality. Although many already know that this city of Extremadura enjoys a great historical and cultural value, el Arco de la Estrella is a clear example of this. This arch is part of the walled enclosure that is located in the old city of Caceres, being its most famous and used arch since its construction in the fifteenth century.
Although nowadays anyone can cross this arch when visiting the historical city of Caceres, in its origins the carriages that wanted to access the interior of the Playa Mayor passed through it. Formerly the walled area of Caceres served to defend the city, in the same way as the Torre of Bujaco, but over time it lost its defensive power especially since the construction of the Arco de la Estrella

The main arch of the city of Caceres

This arch built in the fifteenth century was remodeled in 1726 by order of Bernardino de Carvajal Moctezuma who already had a palace near the Torre of Bujaco also located in the Plaza Mayor of Caceres. It was from that remodeling that the door got its oblique form so that it did not obstruct the passage of any carriage at that time. Before this happened, pilgrims coming from the Vía de la Plata already crossed the arch to continue their way to the Cathedral of Santiago.
Although el Arco de la Estrella stands out for having had all kinds of historical figures of the time pass through it, we can also find some very interesting architectural elements. On the one hand the arch has the coat of arms of Cáceres on its upper part, while on the other hand it has an image of Nuestra Señora de la Estrella, for which it was baptized with this name.
Photos & videos
Activity 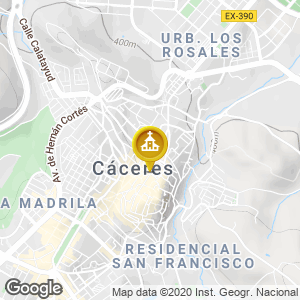