If in the town of Castro Urdiales one of the things that stands out most is its fishing port, in relation to historical monuments is the church of Santa Maria de la Asuncion which gets the first place. Also known as the cathedral of Santa Maria, despite lacking this title, it is a religious building that was built between the thirteenth century and the fifteenth century.

With a Gothic architectural style, it was considered a Historic-Artistic Monument in 1931. Its great magnitude is what most attracts the attention of all tourists who come to this Cantabrian town, in addition to all the details that decorate the rest of this church. One of the most remarkable is the Gothic sculpture of the White Virgin inside.

It was in the 13th century when King Alfonso VIII of Castile decided to build this church in Castro Urdiales. This decision was generated by the good economic situation in which the kingdom of Castile was, generated by using this and other Cantabrian towns as a point of connection with traders from the Netherlands, France and England.

Although many tourists visit this majestic church every year, most of these visitors are pilgrims on the Camino del Norte. There are many who decide to walk the Camino de Santiago along this Jacobean route and enjoy all the emblematic buildings that are found in each of its stages.

The weather in Castro Urdiales 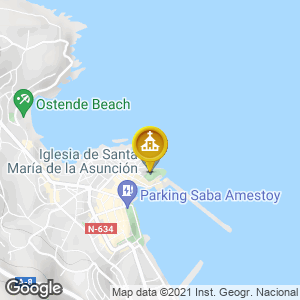