The fascinating encyclopedic park of the English Way

El Parque del Pasatiempo, a place as unknown as surprising 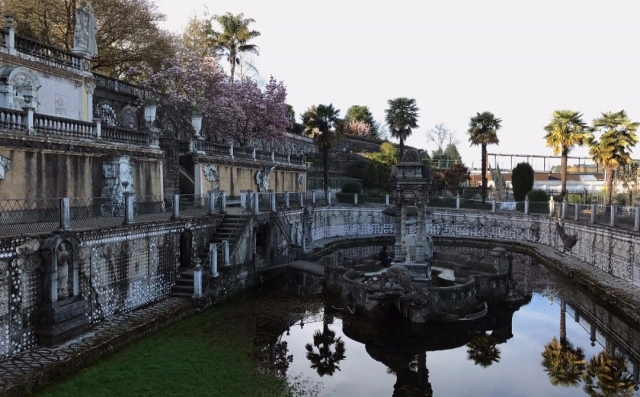 In front of other more popular alternatives to realize the Camino of Santiago, the English Way continues being one of the options less concurred to that couple that recondite. If we add that its route goes through points as fascinating as little promoted, the English Way is one of the routes with the magic of the Camino in all its splendor.

Between the most striking and mysterious points of the English Way, we find the Parque del Pasatiempo (Stage 3 Pontedeume - Betanzos). Many pilgrims are surprised at their passing of the characteristics of this park, since it does not count on their plans to frequent such a construction. What is the origin of this mysterious place? What was its purpose? Why did you end up like this?

The park of Pasatiempo represents one of the most emblematic places of the town of Betanzos. Its construction was realized during the last decade of century XIX by initiative of Juan Maria Garcia Naveira. This philanthropist managed to raise a great fortune along with his brother Jesus after emigrating to Argentina and to constitute there a series of companies. Upon their return they decided to invest large sums of their capital in Betanzos, to beautify their hometown with initiatives such as this encyclopedic park.

The dream of a brigantine philanthropist

With the decision to create a theme park as a recreation area, Juan María García Naveira considers himself a true pioneer and ahead of his time. Parque del Pasatiempo was an example and inspiration for many other theme parks. The construction is replete with references coming from the travels around the world that lived the brothers García Naveira. In this way, it was intended that all brigantines could live in first person the most representative details of all the cultures of the world lived by these philanthropists.

Parque del Pasatiempo has a recreation garden and different levels, connected by stairs and also by subterranean passages that constitute a kind of prehistoric cave. Its facilities are made up of mosaics, paintings and statues, as well as ponds and numerous ornamental constructions. Among other features, this park houses many details of great geographical variety as historical, with references to ancient Egypt, the Great Wall of China or the Roman Empire.

From splendor to oblivion

Since its inauguration, the Park of the Pasatiempo enjoyed a great popularity among its inhabitants. The first decades of the twentieth century lived its stage of greatest splendor, enjoying international prestige with reviews in numerous magazines and travel guides. The decline of this park began after the years following the Civil War, where he began to experience great deterioration and the loss of original pieces caused by robberies and vandalism. At the end of the eighties the city council managed to acquire the park in property, initiating works of restoration and promotion of the park.

Despite the work of the local administration to preserve the park, it is still in a state far from its years of splendor, giving it an atmosphere that will not go unnoticed in the eyes of the pilgrim. For all those who are curious to see it in person, the park's current opening hours are from nine in the morning to nine in the evening, from Monday to Sunday.