The "son of the road" completes the Camino de Santiago

Thomas currently has 27 years, but her history with the Camino de Santiago goes back many years, particularly since birth 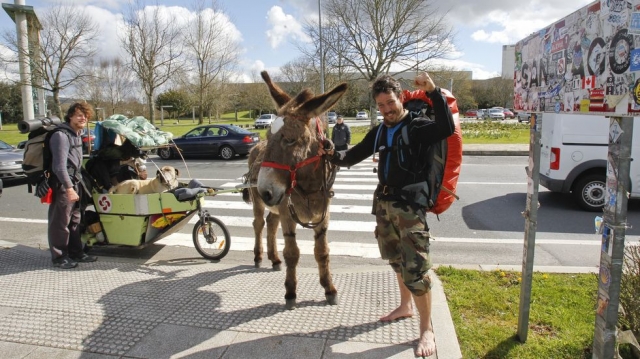 During the last afternoon of May 9, about 17:00 pm, he arrived at Santiago de Compostela Thomas Fouillat, called "son of the road" and considered by many, the youngest pilgrim Way. Thomas currently has 27 years, but her history with the Camino de Santiago goes back many years, particularly since birth.Yves Fouillat and Nadège Dussart, parents of Thomas, met in 1988 when both performing the route to Santiago de Compostela by the French Way.

The mother became pregnant on the road, giving birth to Thomas Fouillat at the end of the route, on July 3, 1988 in Santiago. From that moment the little boy he began to be known as the "son of the road".Now, at 27, Thomas wanted to revive the special experience that their parents lived, to which the Camino changed their lives.

During the last month of October 2015 he launched the young route to Santiago from Toulouse (France), being accompanied by a donkey and a dog as their parents.Together with a friend, Thomas came to the Praza del Obradoiro on 9 May.