How much walking is done on the Camino de Santiago?

We tell you how many kilometers you need to walk on each Jacobean route, the time you would need to complete it and the average you will do per day. 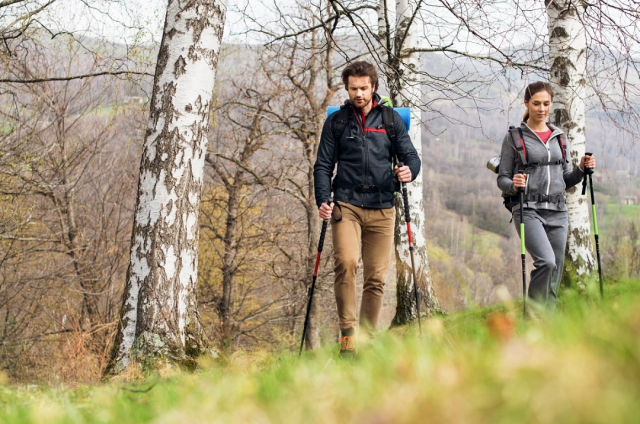 The distance of the main Jacobean routes

One of the most important things when walking the Camino de Santiago is to choose the right pilgrimage route for it. There are not few routes that exist today, so you have to take into account factors such as physical preparation or the free time you have to start the adventure.
Although you do not need a high physical performance to complete the Camino de Santiago, you must overcome the daily kilometers that make up each of the stages. The minimum distance to obtain the Compostela is 100 kilometers, however there are many Jacobean routes that far exceed this figure.
Translated with www.DeepL.com/Translator (free version)

The Camino del Norte is one of the main Jacobean routes. It runs through a large part of the north of the peninsula and originally begins in the town of Irún, located in the northeast of the Basque Country. From this point it advances to the Cathedral of Santiago through the communities of the Basque Country, Cantabria, Asturias and Galicia, crossing through cities such as Bilbao, Santander or Gijón. Depending on how much free time you have, you can choose one of these locations as a starting point, thus reducing the total distance.

The English Way is one of the most chosen by pilgrims who do not have enough free time. Its total distance exceeds the minimum kilometers necessary to obtain the Compostela and for this it only takes a total of 6 days. It starts in the city of Ferrol and runs from north to south, part of the Galician community until it reaches Santiago de Compostela.

The French Way is one of the most popular routes for pilgrims. It crosses the entire Iberian Peninsula from east to west, allowing you to enjoy the fauna and flora of several provinces in the north of the peninsula. It takes more than a month to complete it, but this time can be greatly reduced if you choose Burgos, León or Sarria as a starting point.

The Portuguese Way is attracting more and more pilgrims, especially since the appearance of variants such as the Portuguese Way along the coast. This Jacobean route begins in Lisbon and runs through the entire Portuguese country until it reaches its border with Spain in the community of Galicia. From Galicia, pilgrims can choose whether to follow the traditional route or go along the coast to Pontevedra.

The Primitive Way is the oldest Jacobean route and the one completed by King Alfonso II of Asturias, considered the first pilgrim. It originally starts in Oviedo and crosses Galicia from the northeast until it reaches Santiago de Compostela. Some pilgrims set out on this route from the town of O Acebo, thus avoiding the steep climb of Puerto del Palo.
Translated with www.DeepL.com/Translator (free version)
Activity