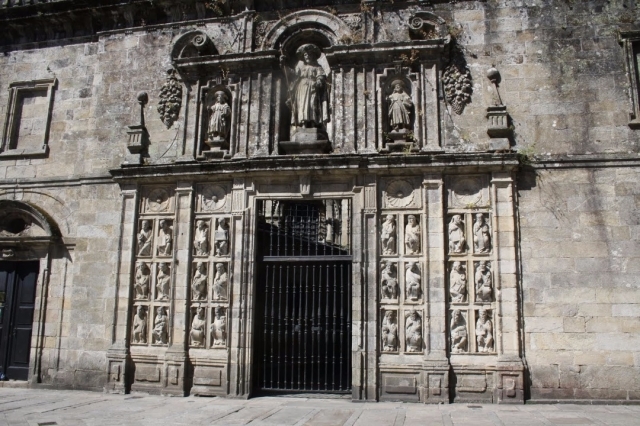 Of the almost 270,000 pilgrims who have arrived in the Plaza del Obradoiro so far this year, many have reached the Cathedral of Santiago unexpectedly found the Holy Door open, although as many of you know, only every Xacobeo is opened. If the last Holy Year dates from 2010 and the next will not arrive until 2021, what piece of the puzzle is missing? Neither more nor less than the celebration of the Jubilee of Mercy, convened by Pope Francis in an exceptional way and involving all the churches of the world.

This week it is worth remembering this unusual event, since it will be next Sunday, November 13 at 5:00 pm when the door will close again, closing the Year of Mercy. It is no coincidence that the celebration of this Extraordinary Jubilee in the heart of the Catholic Church and the Xacobeo past 2010 have led to the most important pilgrimages to Santiago, breaking historic records, so we want to shed some light on what is the Year of Mercy and why it was decided to open the Holy Door of the Cathedral.

The first thing that must be placed is the term Jubilee in the Catholic religion, especially for the unfamiliar, which means the celebration of a year in which indulgences are granted to the faithful who meet certain conditions, such as consolation and sympathy. of suffering and the miseries of others. Jubilees, according to the Church of Rome, can be ordinary, celebrated every 25 years, and extraordinary; that is, summoned by the Pope to commemorate an event. This is the case of the Year of Mercy, which was called by Francis to celebrate the 50th anniversary of the closing of the Second Vatican Council, and why the Holy Door of the Cathedral of Santiago has remained open since last 13 of December 2015.

On the other hand, the Holy Year of Compostela is removed from the ordinary / extraordinary classification to be included in the Jubilee "in perpetuum", which is nothing more than a special authorization from the Holy See so that a specific place can celebrate its own Year. Santo (Santiago is one of the seven cities that count on her). The next Xacobeo will be celebrated in Santiago in 2021, four years before the ordinary jubilee of 2025, but as we anticipated, the Year of Mercy itself has made it possible for pilgrims to cross the Holy Door in 2016 in an exceptional way. all the holy doors of the churches of the world are opened (after the opening of the Holy Door of the Basilica of St. Peter).

The Year of Mercy still needs to be closed in order to start making accounts about its influence on the Camino de Santiago and tourism in Galicia in general, but the truth is that this summer has already been noticed in the autonomous community a very significant rise in number of tourists compared to other years. As for the number of pilgrims, we are on the verge of exceeding the absolute record of 2010, established in 272,412 compostelas; data from the end of October placed this year's figure at 262,913 pilgrims.