Legends of the Camino de Santiago: The Knight of the Shells

Do you know the legend of the knight of the shells? It is the popular story that has given rise to the Concha de Vieira as a symbol of the pilgrim 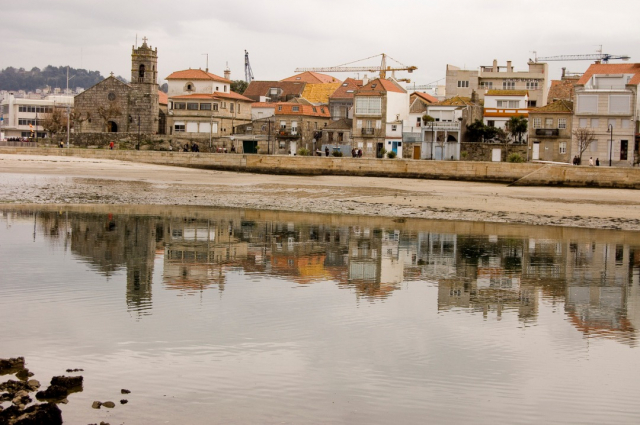 The different legends that exist about the Camino de Santiago have explained today why to use certain symbols or carry out certain traditions. Did you know that the legend of the knight of the shells gave rise to the Concha de Vieira as a symbol of the pilgrim?

The origin of the Peregrine Shell

The legend of the knight of the shells begins with the boat trip of Theodore and Athanasius (disciples of the Apostle Santiago) from Palestine to Galicia. The objective of the trip was to transfer the body of the apostle to bury it in the city of Santiago. The story goes that while traveling on a raft along the Galician coast, they spotted a beach wedding in a place called Bouzas (opposite the Baiona islands). The wedding was two young people from illustrious families named Lobesio Rivano and Caya Valeria. As part of the celebration, they played “abofardar”, a tradition that consists of sending a spear, cane or also called “bofarda” into the air as far as possible and pick it up at a gallop before it falls to the ground. It was the groom's turn, and while he waited for the lance to fall, a gust of wind diverted its path heading towards the sea. The knight entered it so as not to lose it, but the sea caught him and he disappeared.

Time passed and the young man did not appear, so the guests thought that he had passed away. Until they saw how a luminous boat headed to the place where the groom had disappeared. It was then that the miracle took place and the knight emerged from the waters covered in shells. The crew of the boat turned their eyes to the sky and formulated a few words for the groom:

''Jesus Christ truly wants to manifest his power before you and those who are on this earth, for the good and honor of this one, his vassal, who we carry on this ship to give him a Christian burial. Our Lord Jesus Christ wanted to show through you, to the present and to the future, that whoever wants to love and serve his vassal, should visit him where he was buried, carrying shells like those that you are covered with, as a seal of privilege. He, in return, will offer them that on the Day of Judgment they be recognized by God as his vassals, and for the honor they did to his vassal and friend Santiago by visiting and reverence him, he will resurrect them in his Holy Glory and Paradise.''

Another version of the legend says that the groom saw a boat adrift and directed his horse towards the sea in order to save them, but was caught by the dangerous tides. Seeing himself at risk, the young man raised his eyes and asked for divine help to overcome that moment. It was then that he was rescued by the luminous boat and came out of the sea covered in scallop shells. As a reminder of this miracle, everyone who made the pilgrimage to Santiago had to wear a shell as a symbol of devotion.