A small town situated in the Valley of Yerri. In the XII century it had a hospital for pilgrims.

The church of San Salvador contains a Baroque figure of Santiago the pilgrim. A typical linear enclave, the pilgrim route crosses the centre from one end to the other along its Calle Mayor. It has two private albergues.

As an anecdote, the town shares its name with a town in the Region of Murcia, severely shaken by two earthquakes in 2011. The local media picked up on a news story at the beginning of 2013 regarding two French pilgrims who had wanted to begin their journey in the Valley of Yerri but were mistakenly sent by their travel agency more than 500 kilometres from the starting point.

Distance from the Camino de Santiago from Lorca

If you are traveling on the Camino de Santiago or are planning to do so soon, you should know that the distance separating Lorca from Santiago de Compostela is 672 kilometers.

The weather in Lorca 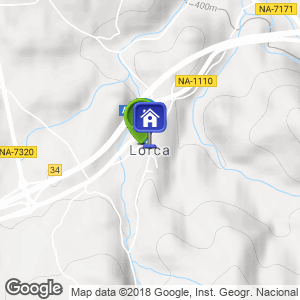