The Camino de la Ría de Muros - Noia is undoubtedly one of the most original of all the routes to Santiago, since many of the stages are not consecutive and you have to go jumping from one town to another to make the 100 km necessary to get the Compostela. Although at first it may seem inconvenient, this peculiarity helps us to know more about this region of Galicia, known especially for its coastal landscapes.

Any landscape usually highlights the integration of architecture in the natural environment and in a geography full of estuaries and rivers, could not miss a bridge as Ponte Nafonso, in the municipality of Noia. The bridge joins this town with Outes, crossing the Tambre river, the construction is 270 m long and 5 m wide. Currently 22 of the 27 arches that support the bridge are preserved.

The history of the bridge goes through many reconstructions in various stages. It was originally built of wood in the 9th century, under the reign of Alfonso II of Asturias. Later, in the 16th century, it was replaced by a stone one, which is the one that remains today, although it was widened a couple of centimeters during the 19th century.

A legend of two brothers

There is a well-known legend about this bridge in the area. It is said that the architect who directed the works, called Alfonso, was the brother of the architect of the Monastery of Toxosoutos, in Lousame. Both had made a promise not to see each other's work until they had finished it, but Alfonso did not keep the promise and died without seeing his own work finished.

The weather in Noia 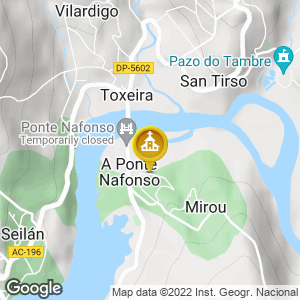