In the País Vasco we can find all kinds of buildings and places of great tourist value, among which is the faro de La Plata, in the municipality of Pasajes. This lighthouse, built in 1855, is located on Mount Ulía, a place from which it was a great help to all the ships that entered the port of Pasajes.
Located very close to Irún, the starting point for many pilgrims on the Northern Way, it is one of the most striking places in the north-eastern Basque Country. In addition to its privileged location, its architectural style and its great height attract the attention of tourists, reaching a height of 13 metres just for the support, and 153 metres if we base it on the focal height.

A lighthouse linked to the history of the Port of Pasajes

As faro de Senokozuloa, this lighthouse was built to help the workers in the Puerto of Pasajes. This port played an important role in ancient times, as it was from here that the minerals from the Arditurri mines were exported. It was for this reason that Carlos Campuzano was ordered to build it, and he chose a large rocky outcrop located in the upper part of Mount Ulía.
Although most people know what its function was, not many know the characteristic history of its name. There are different theories about it, the most plausible being that it comes from the silver-coloured stones found there. It is also curious why this lighthouse is built as if it were a castle, being to protect the structure itself due to its characteristic location.
Translated with www.DeepL.com/Translator (free version)
Photos & videos
Activity

The weather in Pasajes 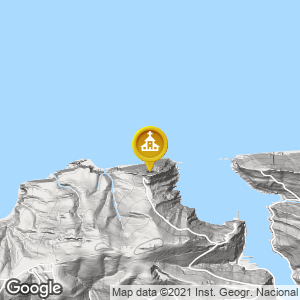