Contemplate almost 30 years doing the Jacobean routes and, therefore, has seen many routes and many places of enviable beauty in its route 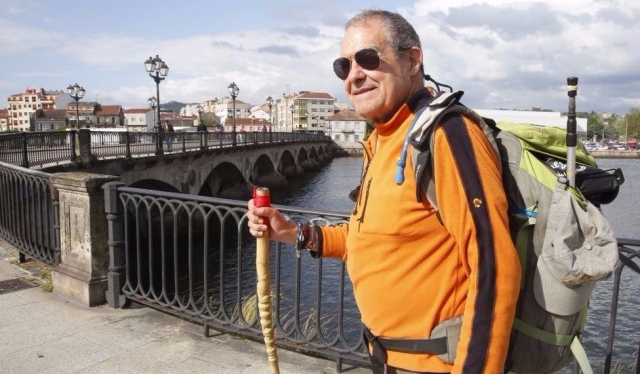 At 79, Pedro Antonio Peña is one of the best and most pilgrims who know the Way of Santiago, having already got 57 Compostelas and having already walked all routes. Recently we were able to talk at length with this retired hotelier who has devoted much of his life to walk the Camino de Santiago. "He stood staring at me," he said, why has traveled no less than 34,000 kilometers since 1987 completed its first road stages in a recent article. Contemplate almost 30 years doing the Jacobean routes and, therefore, has seen many routes and many places of enviable beauty in its route. But as professional and expert, what is your favorite route? "For beauty, landscape, Camino and all, for me is the Camino Primitivo. Along the Camino del Norte, but especially the Primitivo" confesses Pedro Antonio. Yes, he says that "starting in Leon":

Normally when I Primitivo, before I do the four days from Leon to Oviedo, all part of Pajares, is a marvel. I really love nature, the, free open spaces ... get in touch with the field, flora and fauna. - Pedro Antonio Peña

In these years, besides enjoying the experience, Pedro Antonio has seen how the path has changed, mainly on routes better known as the French Way. Specifically, perhaps, too much marketing note Camino de Santiago; "I understand they have to live the way but has already become a tourist business. In addition, each day, are more turigrino ...", recognizes this walker who has 30 years touring routes. In fact, he confesses that 20 years ago in an interview coined the term "bicigrino" differentiates Pilgrim bike.

I said that one begins to see the bicigrinos, because for me there is the pilgrim cycling and bicigrino. The bicigrino is a pilgrim to use. Which cycling ... I've been stopped, seeing some beautiful miliarios there in the Via de la Plata, Romanesque, and have a group of three or four bike and not stop. Cycling which will make kilometers, and I think that is not going to enjoy the journey. He has a goal and ... not all, of course, but hey, this was the case. - Pedro Antonio Peña

In fact, the anecdotes in this regard are numerous to Pedro Antonio. Note that making the Via de la Plata, Seville Cáceres, a man approached while walking along the road and asked them if they were going to stay there, in which case he recommended his hostel, doing commercial work "and until you come to seek the Way. these are things that ... those are the changes that encounter and collide. " However, for Pedro Antonio everything is negative in this regard, and acknowledges that in recent years the Way has greatly improved its infrastructure, "otherwise, we've been sleeping on the floor in the open, or sleep on the floor a church - I happened on the first of the French Way, to sleep now in the municipal shelters This is a luxury, is wonderful, and there are so many people ".!.

Of course, in all these years they have not been good all times. In fact, some stories are certainly tricky, since the beginning Pedro Antonio walked totally alone, but now says he does not recommend it for safety. He admits that on occasion became lost and worry significantly. "On the Via de la Plata, leaving Zamora up, there is a swamp, marsh Ricobayo. I was very grown up, and arrows were formerly laid down when the water ... there were painting" recalls the pilgrim " I lost arrows, we found them and I had bad because I dropped nearly two hours wandering around not knowing where he was going. by going alone you agobias, especially being the first time I did it. I think it was in the year 95 or 96 ".