At the limits of Ondarreta Beach, at the end of the city of San Sebastian and at the foot of Mount Igeldo is located the Wind Comb, one of the most distinctive works of the Spanish sculptor Eduardo Chillida and the province of Guipuzcoa. The ensemble was installed during 1977 in collaboration with the Basque architect Luis Peña Ganchegui, who was responsible for anchoring and designing the works so that they would adapt perfectly to the maritime environment.

The Wind Comb, popularly known in Basque as Haizearen orrazia, is a set of three steel sculptures weighing 10 tons. Each of them are embedded in rocks that protrude naturally into the Cantabrian Sea, and where the waves beat to embrace them. Art and nature are unified to have as a result an incredible work that seems to be born from the rocks themselves.

The sculptural ensemble resists the successive onslaughts of the Cantabrian Sea.

This work by Eduardo Chillida and Luis Peña Ganchegui was completed in 1976. Since then they have withstood the fury of the sea when there is a bad storm. But in addition to the three sculptures, there are also air and water outlets around the works, which are provided by the waves that never stop hitting the rocks and sculptures.

The Wind Comb is formed by a set of three heavy sculptures built from terraces of pink granite and steel that are attached to the rocks in such a way that they resist the successive onslaughts of the sea. It is one of the most popular tourist attractions in San Sebastian, since in this maritime space you can enjoy spectacular views, especially during storms, when the waves rush towards the rocks of the cliffs of San Sebastian. 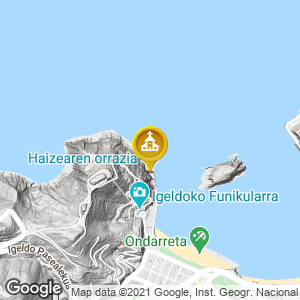