A domestic signaling causes the pilgrims about 300 meters from the official section are forwarded, through different points of interest and an establishment 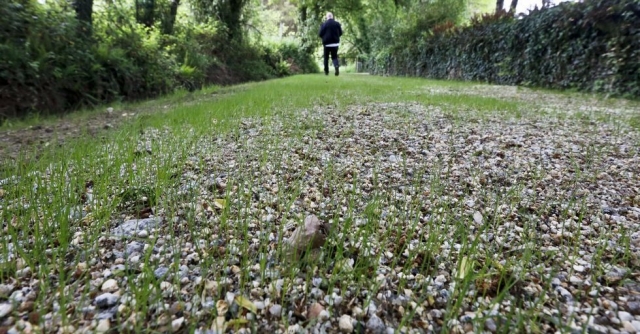 Camino Primitivo route, passing through the town of Bascuas, Lugo, has been suspiciously diverted about 300 meters from the usual layout, despite recent original layout conditioning.On the descent from the quarries of Bascuas, at a certain point, someone withdrew mileage and official plaques that mark the original path to deflect it by another route also signals that mislead painting even more pilgrims. The original layout, also appears to be planting herbs, pretending that the road is abandoned and not used by pilgrims.

In this way, pilgrims still fooled the new detour that leads the parish church, guided by a "placed" plates this unofficial route linking the parish core Bascuas with Daquelcabo village. Just before the pilgrims return to resume the official route of the Camino Primitivo, they are an entertainment venue where soft drinks, beer and sports drinks are sold at 1.50 euros the can in vending machines. This detour official does not lengthen the leg until the 1230 meters when the official route would only have to walk 930 meters.