As every year Jaca embraces the Christian, Muslim and Jewish cultures in their Medieval Market, for which this year 8,000 people a day pass 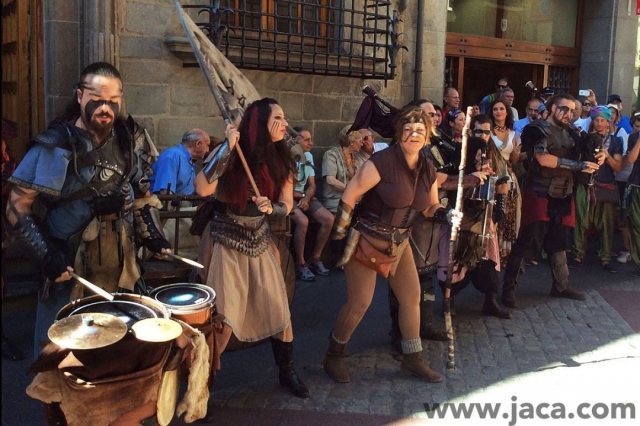 Medieval markets are emerging in recent years in Spain with great force because of the wide range of activities, product offerings and shows involved. Undoubtedly one of the most popular-and with a long tradition behind it- is the Medieval Market of Three Cultures of Jaca, which transports us every year to the Middle Ages, an historical period in which the municipality was a very important focal point of the Camino de Santiago. The town, centuries later, is still surrounded by pilgrims walking the French Way through the Aragon valley from Somport.

The proposal of this medieval market is to bring closer commercial, economic and cultural atmosphere of the time in cities like Jaca in the Camino de Santiago. There are 110 artisans (both gastronomic as masters of ancient crafts), 14 workshops and 6 taverns that involve the public in numerous activities, all under three totally different atmospheres that recreate the Christian, Muslim and Jewish culture in the Middle ages.

The Medieval Market of Three Cultures is the most popular event and visited in the the XXV International Festival on the Camino de Santiago, that precisely concludes this Thursday. The festival estimates about 37,000 visitors, of which 8,000 daily correspond only to the medieval Jaca market these days. The festival, organized by the Provincial Deputation of Huesca has been running since last August 4th, and closes its doors today with activities held in the municipalities of Jaca, Santa Cruz de la Seros, Berdún, Made and Siresa.

As always the festival has opted to combine musical performances with the important cultural and historical heritage of the area, organized 302 concerts, 24 medieval markets, street theater, exhibitions, films and lectures for more than 20 days this August . The Medieval Market of Three Cultures of Jaca, the Theatre Festival in the Street or shows some known interpreters have been some of the lights of this festival, so closely linked to the Camino de Santiago.