The success of the Camino de Santiago, an example for the revitalization of the European identity?

The archbishop of Santiago, Julián Barrio, claims a Europe of "values" to rescue his "spiritual heritage" from the lethargy in which he is plunged 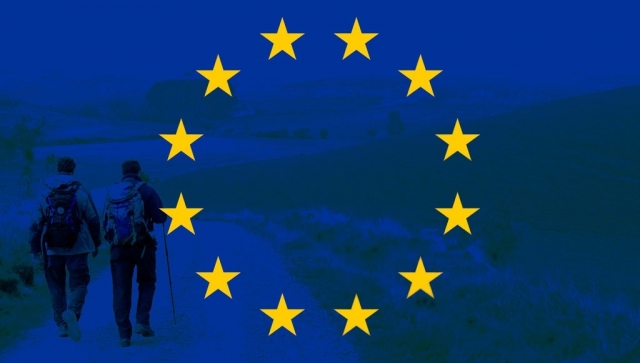 Since the Middle Ages the Jacobean pilgrimages have been a nexus of cultural, social, historical and religious union that has helped define the identity of Europe and "set it up" over the centuries. In these times, with the identity of Europe in crisis and in serious danger of breaking down, it is necessary to forge "a new and diverse unity". This is the idea shared by the archbishop of Santiago, Julián Barrios, who on Monday participated in the Forum Europe. Tribuna Galicia, organized by New Economy Forum.

Monseñor Barrios has spoken at the forum organized in Santiago de Compostela affirming that it is possible to "revitalize Europe", "rediscovering the identity" in the diversity and the "welcoming and open" spirit of European peoples, as demonstrated by the great success of affluence of the Camino de Santiago, which this month of November has beaten an absolute record of pilgrims. Barrios also clarified that in his opinion, you have to go further in the search for identity, because if you remain "geographically and economically" it will not have solidity, appealing to the recovery of a Europe of "values" that rescue His "spiritual heritage."

In his opinion, "Europe is rooted in Christianity," emphasizing the importance of symbols such as the Cathedral of Santiago and the square of Obradoiro, where he says "believers and non-believers are reunited."