Some Praetorians get the coveted Compostela

The image of this group of Praetorian caused enough excitement on his arrival in Santiago, dressed in their armor, their pilum, large shields and swords 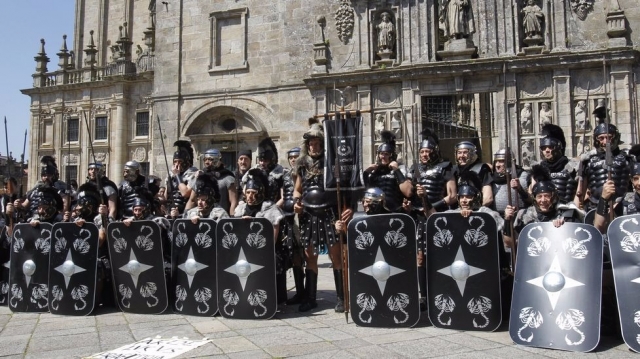 It was an atypical group of walkers and quite peculiar, something that prevented us from achieving their goal: to reach Santiago de Compostela and get the coveted Compostela. This is the group of the Praetorian guard Lugo, who arrived in the middle of this week to the Plaza del Obradoiro after completing four stages called Primitive Way. The group took the credential of Lugo and were given the Compostela.

The image of this group of Praetorian caused enough excitement on his arrival in Santiago, dressed in their armor, their pilum, large shields and swords; the basic equipment of any Roman soldier. When formed in the Praza da Quintana were many residents and tourists who decided to get closer to chat with them or photograph the moment, on a holiday in Galicia.The Way of these Praetorians also served to promote the Arde Lucus, Lugo party held in mid-June that revives the Roman past, and many tourists unknown. Not only visitors to Santiago were interested in the Arde Lucus, during the stages many pilgrims came to ask who they were and why they were dressed the way with such equipment.