Walking the Camino in 13 stages to raise funds against cancer 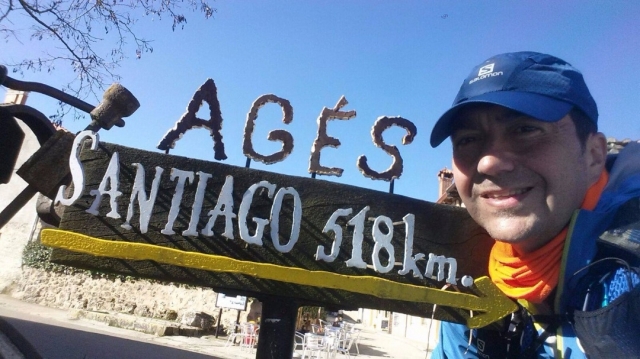 Just a week ago, Gustavo López, a photographer, teacher and manager of an audiovisual training company, began a great personal challenge that is taking him from Saint-Jean-Pied-de-Port to Santiago de Compostela for a supportive reason. Gustavo, who has extensive experience in the Camino de Santiago (he has traveled the French Way up to 8 times), wants to pay homage to a loved one recently lost by cancer covering the almost 800 km that separate both populations in only 13 stages.

The challenge that faces Gustavo, who is close to 50 years old, is inspired by the pages of the Codex Calixtino, as you probably know, a manuscript of the twelfth century considered as the first guide of the pilgrim written. In the codex there is a route of only 13 stages between Saint-Jean-Pied-de-Port and Santiago, originally designed to travel on horseback, but Gustavo, with more than 10,500 km of Camino de Santiago on his legs, Walking by itself, without external support.

With this challenge, which he has called "El Camino en 13" and that is equivalent to covering the distance of 18 marathons in 13 stages, Gustavo wants to raise funds for the Spanish Association Against Cancer, where they will stop the contributions in full, and That the tour costs him himself. The stages that since 2 April Gustavo travels are not equidistant, finding in its route some "everest" stages like the two that separate Nájera de Burgos (175 km in two days) and has already covered half of its route, The tough challenge is even closer.

There is a little more than 20 days left to do our bit to contribute funds for cancer research. Any one can make contributions and "buy" some or several of the 800 km of the trip of Gustavo. To ensure total transparency the contributions are managed directly by AECC, where it is close to reaching 30% of the target.