In the province of Pontevedra, we find many historical buildings of Roman origin, among which we can highlight the Roman bridge of Ponte Sampaio. This construction is the most emblematic point of this parish, since it has its origin in the Middle Ages, between the tenth and eleventh centuries.
Although today the bridge does not have the classic elements of the original construction, the structure is the same as at that time. It maintains its ten arches that we can see along its entire length, through which crosses the river Verdugo, which flows into the Ría de Vigo.
As hundreds of years ago, the Roman bridge of Ponte Sampaio serves to unite the towns of Arcade and A Rabaleira, but also witnessed great historical moments of great importance. It was on this same bridge that the battle of Ponte Sampaio was fought, which took place in 1809 against the French.
If you are enjoying the Rías Baixas or you are walking the Portuguese Way towards the Cathedral of Santiago de Compostela, the Roman bridge of Ponte Sampaio is a mandatory stop. Only on its structure you can enjoy the unique panoramic view of the Verdugo River and all the surrounding parishes.
Photos & videos
Activity

The weather in Arcade 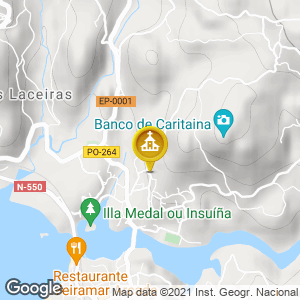