The Monastery of Santa María la Real de Oseira, in the town of San Cristóbal de Cea, is one of the greatest examples of Galician heritage, a must if you visit the province of Ourense. Although its construction began at the end of the 12th century, there are already references to the original monastery in 1137, when an order of monks withdrew to this area of the Martiña mountain range.

In 1141, the order became part of the Cistercian Order, becoming the first foundation of the religious order in Galicia. It is one of the most historically important points of interest in Galicia, with a past of great economic influence and splendor throughout the area, until a period of decline, back in the fourteenth century.

A masterpiece of Romanesque architecture

The splendid monastery is considered a masterpiece of Cistercian architecture and includes a Romanesque church consecrated in 1239, a chapter house and three cloisters, all built in different periods (the Porter's lodge, the Processional and the Pinnacles).

The monastery also includes numerous paintings and carvings that can be contemplated. In addition to the monastic complex, you can visit a museum inside the monastery that exhibits a collection of stone objects, the result of excavations and renovations that have taken place in the temple over the centuries.

Opening hours of the monastery of Oseira

The monastery is open to visits in organized passes every day of the year, although on holidays it has a reduced schedule due to the masses. They have two passes in the morning -at 10.00 and 12.30- and two in the afternoon -at 16.00 and 17.30-.

The weather in Cea 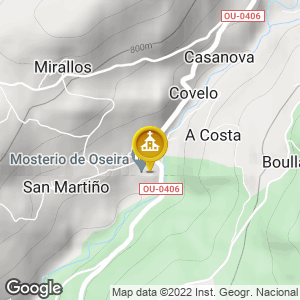