Do you know the new habit that carried pilgrims to reach the Cathedral of Santiago?

This new habit, you probably end up becoming "tradition" is related to plaque recognizes the Camino de Santiago as European Cultural Route 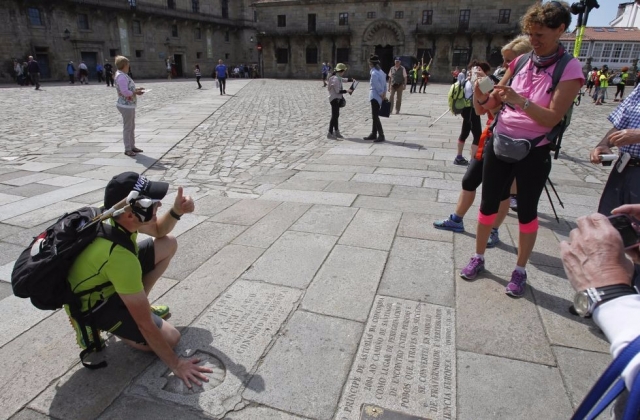 Plaque in the Plaza del Obradoiro - XOÁN A. SOLER

In addition to its history and cultural wealth, the Camino de Santiago and the monuments that "decorate", it is known for the large number of traditions that arose in this pilgrimage. Some places have centuries-old traditions, such as butting in the "Santo dos Croques" (Master Mateo) or the introduction of fingers in the Portico of Glory.

Pilgrims arriving at the Galician city, and tourists who visit the Cathedral, do not hesitate to wait their turn to be photographed with the plate, usually crouched beside her and putting her hand on the shell carved in stone. Others prefer to touch the symbol of the pilgrims foot.On the origin of this custom, no one knows for sure how it originated. It seems that many tourists and pilgrims made by imitation, because someone did previously in front of them.