Don't you know the city of Lugo? We review one of the most characteristic cities of Galicia through which the Camino de Santiago passes

For the walkers of the Primitive Way, the passage through Lugo becomes a unique experience, very rich by the architecture of this small town, but full of history. In the city the pilgrims will find a single hostel, but they will not have problems to give with all type of services to only two stages of Melide, where we can connect with the French Way. In addition to being the fourth largest city in Galicia, Lugo also names the region and the province to which it belongs.

Lugo was founded by the Roman magistrate Paulo Fabio Máximo in the year 25 a.C., being named at the time like Lucus Augusti. The biggest attraction of the city of Lugo is its Roman wall, declared a World Heritage Site by UNESCO and was built between the years 260 and 325. Currently the wall is preserved in very good condition even today, maintaining the totality Of its perimeter, although it is not necessary to stop to visit other historical vestiges that await us, like the thermal baths or the Roman bridge, the cathedral of Santa Maria or the church of San Pedro, besides to take a look at the enormous redwoods of the park of Rosalía de Castro. 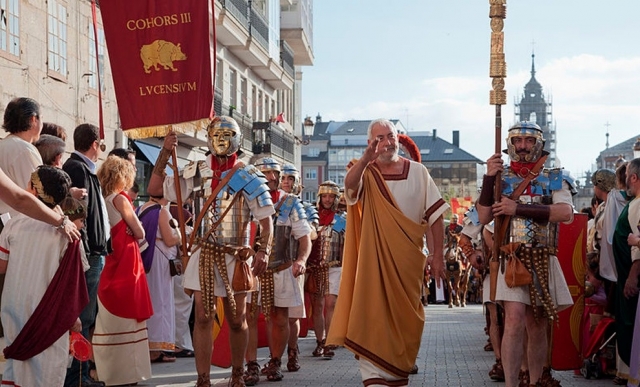 Do not miss San Froilán and Arde Lucus

The city of Lugo has two very remarkable festivities: San Froilán and Arde Lucus. The San Froilán is a very traditional celebration, which is celebrated on October 5, coinciding with the anniversary of the saint's death. Arde Lucus, for its part, is a party that emerged in 2001, held every year in the middle of June and where people disguise themselves in typical Roman clothes to recall the past of the city and celebrate its foundation (it is about Of Fiesta of Tourist Interest of Galicia).

As for its gastronomy, Lugo stands out for typical Galician products, such as the empanada, the Galician broth and the typical pastry products of the carnival (frisuelos, ears, donuts ...). Specifically, in October, in Lugo the "fair food" predominates due to San Froilán, being octopus to fair or meat to the cauldron two products very common for these dates. The most popular tourist motto of the city is «And to eat, Lugo».