A bridge that connects two provinces

The Itero Bridge is located in the town hall of Itero de la Vega (Palencia). Making the French Way you will know all the secrets that this town awaits. Considered an important enclave of the foundation of Castilla y León, as it is one of the places of passage for pilgrims who are on this route.

Its beginnings date back to the 11th century, when King Alfonso VI of León ordered it to be built, in order to help the pilgrims to save the Pisuerga river. It has a Romanesque style, despite having been remodeled in the 17th century, they respected its primitive style.

Thanks to this iconic bridge over the Pisuerga river, the town is accessed. The peculiarities it enjoys are several: it is one of the longest on the Santiago's Way, with eleven arches of masonry. In addition, it links two of the provinces of the community of Castilla y León: Palencia and Burgos.

Other data of interest

It was a very famous bridge in the Middle Ages, as it was mentioned in the Codex Calixtino, as one of the most beautiful and longest on the Santiago's Way. Near the bridge was the church of San Nicolás, a parish temple of all the inhabitants of the town. Currently, it works as a shelter under the name: San Nicolás de Puente Fitero Hospital. 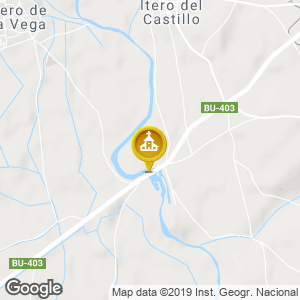