We tell you why John Paul II is called the first pilgrim Pope, and the visits he made to the Camino de Santiago and Galicia 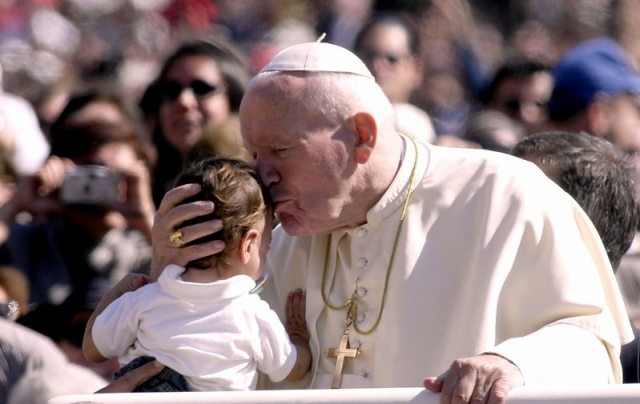 There are many historical figures who have traveled the Camino de Santiago, among them, we already know Alfonso II of Asturias, Alfonso III of Asturias, Santo Domingo de la Calzada and other illustrious figures.

A large number of influential people have made pilgrimage along some sections of the Jacobean route. These mentions could not miss John Paul II, the first pilgrim pope who visited Galicia twice and was the first Pontiff to do so in the Holy Year.

John Paul II was a Pope who canonized 24 Spanish blesseds and appointed 8 Spanish cardinals in the nine consistories of his Pontificate, of which two of them are part of the Roman Curia.

Why is John Paul II called "the first pilgrim pope"?

In 1982, John Paul II became the first pilgrim Pope to arrive at the Cathedral of Santiago. Seven years later, he returned to the city of Compostela on the occasion of the IV World Youth Day. At that time, he traveled the last hundred meters that lead to the Cathedral of Santiago and put on the characteristic cape worn by the pilgrims. Next to him was Cardinal Ángel Suquia, an archbishop of Santiago de Compostela who served for 10 years.

The objective of Pope John Paul II to reach the cathedral was to make the Camino de Santiago known to the whole world, something that he more than achieved and attracted thousands of pilgrims. Juan Pablo made five trips to Spain, and in two of them he visited the Galician community. After Juan Pablo's first trip in 1982, it was necessary to wait almost three decades until Benedict XVI's trip in 2010 to the Cathedral of Santiago in the Jacobean year.

The first visit that John Paul II made to Galicia began on a journey that he undertook for ten days throughout Spain. During his expedition he visited different Spanish cities: Madrid, Ávila, Salamanca, Toledo, Seville, Granada, among others.

Once he arrived in the city of Compostela, he officiated the Pilgrim's Mass at the Lavacolla airport, and hours later he held a European act in the cathedral. In it, he alluded to the Christian roots of Europe and prayed at the tomb of the Apostle Santiago.

During his visit, the Pope assured that he felt attracted to this country and its "fidelity to the Church and service to it, written in apostolic companies and in so many great figures", which lasted in the most difficult moments.

In 1989, he returned to Santiago de Compostela on the occasion of the IV World Youth Day, where he greeted millions of young people and asked them not to forget the historical legacy of the Xacobeo and to maintain their fidelity to the Catholic faith.