The pilgrimage route, twinned with the Jacobean route, takes us to a version of millennial rural Japan, far from the accelerated life of the big cities

Today we begin a new series of contents in which we want to look up the Camino de Santiago and take a look at other pilgrimage routes scattered around the world, many of them related to other religions. Our first visit takes us to Asia, specifically to the rugged southern peninsula of Kii, in Wakayama prefecture, which in turn is located on Honshu, the largest island in Japan. Since 2004 the peninsula has the privilege of being considered a World Heritage Site by Unesco, calling it sacred sites and pilgrimage routes of the Kii Mountains.

Kumano Kodo is the name given to a series of pilgrimage routes that the Japanese have been traveling for centuries and that cross their paths through the mountainous Japanese peninsula of Kii to the revered temple complex Kumano Sanzan, the birthplace of the Kumano cult. Kumano Kodo and the Camino de Santiago have many things in common, starting with being the only two pilgrimage routes declared World Heritage, in addition to being twinned since 1998 and having their origin in the same historical period, the Middle Ages.

Kumano Kodo is recognized something like the root of Shinto, the Japanese faith in the deities of narutaleza; the impressive route runs both through mountain escapes inhabited by forests full of cedars, rivers and beautiful waterfalls, as well as by small traditional wooden villages that line the road. He began pilgrimage to Kumano Kodo in the Heian period (794-1192). 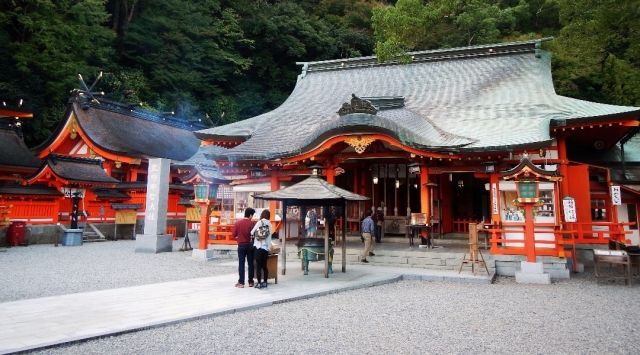 The Three Shrines of Kumano

The routes of Kumano Kodo lead to the great Shinto temples known as the Three Kumano Shrines (Kumano Hongu Taisha, in Tanabe, Kumano Hayatama Taisha, in Shingu, and Kumano Nachi Taisha, in Nachisan) and are revered by Japanese pilgrims for centuries, being the temple of Kumano Hatayama Taisha the largest, most important and from where it is said that the gods inhabit.

The most popular of the pilgrimage routes is Tajijiri-Oji, the gateway to the sacred Kumano area, which leaves the pilgrim the option to spend the night in a traditional minshuku, something like a more affordable version of a ryokan ( Japanese traditional spa) in the small village of Chikatsuyu-Oji. After completing the long journey to the sacred place, travelers can relax at the unique world heritage natural spring open to the public in Yunomine.

The spiritual pilgrimage to Kumano Kodo is related to the faith tuner, but also Buddhist, the two most practiced religions. On the pilgrimage route are both Shinto temples and Buddhist shrines, an example of the harmony in which both faiths coexist in the Asian country since the sixth century, with millions of Japanese professing traits of both beliefs.