The story of Santiago, patron saint of Spain and Galicia

Today we celebrate the feast day in honor of Santiago Apostle but ... know well the so-called "James the Greater"? 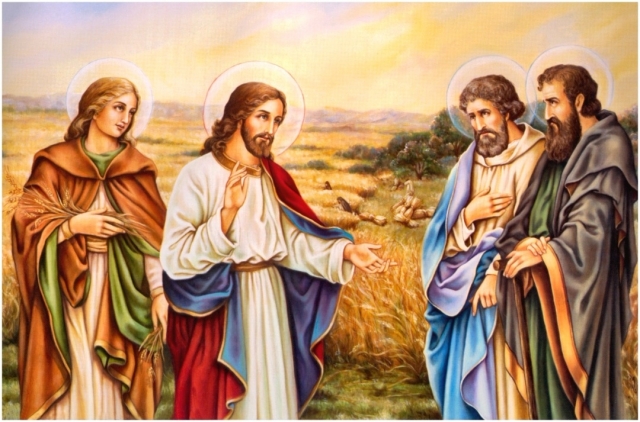 Today all Spain is celebrating - although Galician communities like the party is more representative - because of the fiesta in honor of Santiago Apostle. However, we know well the so-called "James the Greater"? In this article we review in a few lines, life and Santiago Apostle and the story of his tomb that led to Santiago de Compostela.

Who was St. James?

James the Greater is the name Christian tradition put to James of Zebedee (to avoid confusion with another disciple), son of Zebedee and Salome, brother of John the Apostle and one of the twelve apostles who did not abandon Jesus in the New Will. Born in Bethsaida (Galilee), is said to be with his brother, his mother, Salome, she was also a follower of Jesus. Santiago was one of the first followers of Jesus who felt the need to follow as disciples, when he was fishing in the Sea of ​​Galilee with his brother. According to the Bible account, both Santiago, as John or Simon Peter, are disciples of Jesus have more confidence and deal with the above. Santiago is witnessing some of the miracles performed by Jesus, as the resurrection of Jairus' daughter, the transfiguration of Jesus or his appearance on the shores of Lake Tiberias, and resurrected.

How did you come to Spain?

Santiago would have been sent to preaching after Pentecost, across the sea and coming to Hispania (Spain and Portugal present), purpose of their trip. After passing the Pillars of Hercules - name with which formerly was known Strait of Gibraltar - Santiago el Mayor began his preaching in Gallaecia, the name the Romans identified Galicia and northern Portugal part. Of course, this is one of the theories of his arrival in Spain, as others claim that their arrival was by Tarraco and began his preaching by the Ebro Valley. According to tradition, the Apostle James got his message calara in the population, obtaining several disciples in Spain would continue evangelizing in the peninsula when James returned to Jerusalem.

Seven were those who followed in the footsteps of Santiago, apostolic men, being all together when in the year 40 the Virgin Mary appeared to St. James the Greater in Caesaraugusta. According to tradition, shortly before the death of Mary, this is visited by the resurrected Jesus. He asks to be surrounded by the apostles on the day of his death, but all were preaching scattered around the world.Thus, Jesus allows Mary appeared to the apostles, to warn them of his own death. After appearing to Santiago in Caesaraugusta in Pilar (now Zaragoza), Santiago Apostle would have returned to Jerusalem to meet with Mary, place would not return. The legend of his grave According to tradition, James would have found death on his return to Jerusalem, between 41 and 44, at the hands of Herod Agrippa I, King of the Jews and grandson of Herod the Great. Despite his death in Jerusalem, his disciples have managed to keep the body and remove from the Mediterranean Sea to Galicia, where he would have buried in Iria Flavia.

Much later, about the year 813, during the reign of King of Asturias Alfonso II the Chaste, a Christian hermit told the Galician bishop Teodomiro he had seen a light on an uninhabited mountain. In researching the place, they found a tomb of Roman origin where a decapitated body was discovered. Alfonso II ordered to build a chapel on the grave, which is the oldest source of the Cathedral of Santiago de Compostela. However, official recognition as the tomb of Santiago did not come until much later. In 1589 the English privateer Francis Drake wanted to conquer Compostela after landing in La Coruna, so the archbishop agreed with the Cathedral Chapter the most important treasures hide it.

These treasures were hidden behind the altar of the chapel, about 30 meters deep, according to the excavations in the cathedral in 1878 and 1879 by Antonio López Ferreiro. In these "recent" excavations, it was found under the Cathedral of Santiago de Compostela, a Roman mausoleum with the other three people: because of the tradition and the number of bodies were identified with James and his disciples Athanasius and Theodore. Pope Leo XIII appointed a Congregation to analyze the remains and although the documents sent to Rome was not convinced, sent Monsignor Agostino Caprara investigate this discovery in the field. Upon confirmation that the most of the bodies found had been beheaded, the resolution of the Congregation was posted on July 25, 1884, in which Pope Leo XIII called the pilgrimage to Santiago de Compostela.

As for the archaeological evidence, it has been known prior existence of a dolmen necropolis and a Roman cemetery. It is known that Compostela was a pre-Christian necropolis, but this does not help solve or deny the mystery of the tomb of Santiago. The Christian tradition says was the rest of St. James, but scientifically could not decide whether it is indeed Santiago or any other important Christian martyr.