This time we get into the story, or rather, legend, best known related to the mystery and the Cathedral of Santiago. Do you dare to discover it?

The Camino de Santiago is a journey that could well be considered magical, a unique experience that is etched in each of the pilgrims who decide to follow it. A special journey that is characterized not only for the reasons that lead us to do it, but also the background, frame and curtain representing each of the routes, always full of charm.

Galicia is a magical land, that sure you already know by now. Recently we reviewed one of the most famous legends, perhaps most, the Holy Company and whose history can recall. It is not the only one of the "stories" that passes from generation to generation, even less in the way. Today we move in which possibly is the best known of Santiago de Compostela legend, the ghost Pilgrim.

Are there ghosts, wandering souls? Well, that really is a question we can not answer, but what is certain is that the story in question has that aura of mystery, and at the same time charm-tragedy that always seems to be linked to the stories with centuries back. Pilgrim ghost legend leads us to Santiago, specifically the Plaza de Quintana. 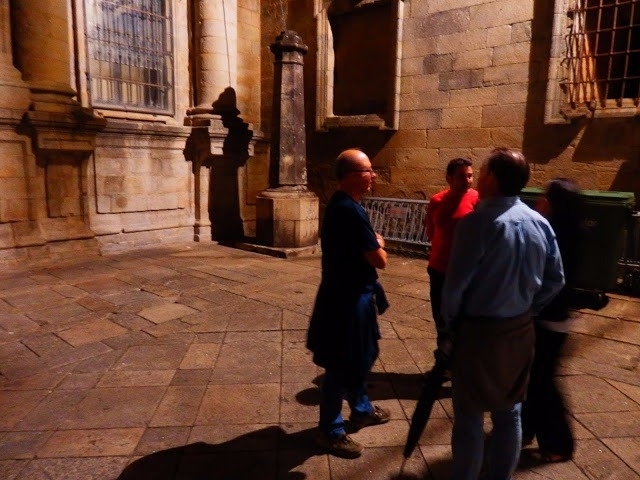 What makes it so special? The appearance of a silhouette shadow on this case, which comes as dusk onwards takes the form of a pilgrim.Praza da Quintana, or also known Quintana de Mortos, is one of the many landmarks that houses Santiago. As stated by the name, was for centuries a cemetery until due to lack of space finally decided to closed down as such in the late eighteenth century. Since then the legend known pilgrim has done nothing but grow and grow. Visitors who come to the site will see the "specter" at the bottom of the Clock Tower, between the Royal Gate and the entrance of the Holy Door, perfectly dressed in coat, hat in addition to the staff, all the result of the effect It is producing optical lighting arrester and the Cathedral.However, there are two legends that seem to be linked to the now famous ghost Pilgrim, and then we will tell.

One of the legends is directly related to a priest and a nun. As stated in the story, the priest felt a great love for a nun belonging to the Convent of San Pelayo, located in San Paio de Antealtares.In order to be alone with her, the priest walked every night a narrow secret passage beneath the Plaza de Quintana, which united as we can imagine the Cathedral with the convent. Fruit of love for one another, and due to fatigue of the priest with the situation, he proposed the nun left at midnight the next day in the Plaza de Quintana to elope together, and thus start a new life.

It came the night after the proposal. The priest went to the appointment in the right place wearing a robe own pilgrims to avoid suspicion. Unfortunately, the nun, her beloved, never appeared. Since then, it says the cleric goes night after night to the square to wait for his lady...

The following legends is directly related to the Way, a story that takes us nothing more and nothing less than the fifteenth century. Situating on that date, and putting ourselves in the skin of a criminal of the time, one of the ways to get the full pardon spent to realize the Camino de Santiago, demonstrating our deepest regret and respect for the Apostle.One case has to Leonard du Revenant as a protagonist. Son of a nobleman famous and rich Paris.

With high expectations to seize fortune parent as soon as possible, he decided to kill his father. He soon be judged by the Duke of Burgundy, but instead of sentencing him to death because of rumors that placed Leonard as a parent even possible this, chose otargarle punishment and penance to complete the Camino de Santiago.Leonard, decided to make the pilgrimage in order after concluding the trip made the fortune of his father, he fell in love shortly after crossing the Pyrenees of an innkeeper.

Unfortunately for Leonard, the girl was already compromised. Arrogance and complete coldness of the noble resulted in not one murder, but two. Overnight and hidden in a forest, Leonard murdered the young couple. After abduct and rape her, the noble ended his life.

The news quickly run like wildfire among the authorities of the time. Leonard, frightened by this time sentenced to death, decided to impersonate Franciscan monk in order not to attract attention among neighboring peoples. "Converted" priest, Leonard finally arrived in Santiago.

It only remained for shelter, but to his misfortune, every one of the inns were full.In order to complete the pilgrimage as soon as possible, Leonard decided to sleep in the street, against the wall of the cathedral. Thus, at dawn the priests could grant forgiveness for their sins. I was not going to be an easy night ...According to legend, the same night that Leonard fell into the arms of Morpheus next to the Cathedral, appeared in a dream his father, who for more signs addressed his own son, "Leonard, my son !! With your pilgrimage to Santiago you stay redeemed from the penalty for my death, as I have forgiven you. But you shall perform condemnation of the two young men you've killed during your pilgrimage.

Until their souls not to travel to Compostela and show you his forgiveness, you can not embrace the Holy Apostle ".After addressing his son, he, afraid, drew his sword to attack his father. Much faster than Leonard, the father drove the blade into the chest of his son. From here, the rest is history. Leonard goes night after night at the same location, the Plaza de Quintana, to await the arrival of the two young men, and thus to obtain the final forgiveness.