Legends of the Camino de Santiago: The Battle of Roland and the giant Ferragut

This is one of the more widespread legends related to the Camino de Santiago  throughout Navarre and La Rioja, the battle between the nephew of Charlemagne and the Muslim giant 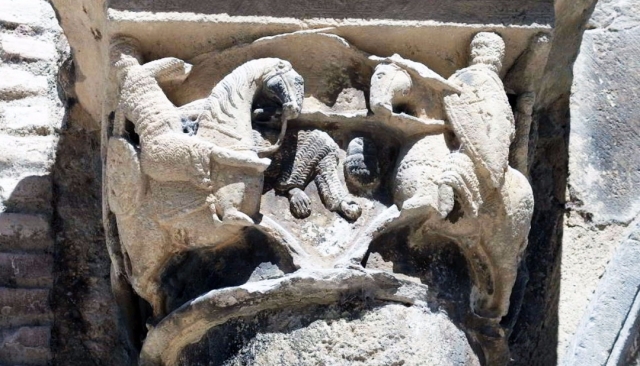 The legend of the battle of Roland, nephew of Charlemagne, and Ferragut (or Farragut), giant supposedly from the lineage of Goliath, is one of the most widespread on the Camino de Santiago, especially in the stretch which runs from Roncesvalles to Puente de la Reina, his figures being present even in capitals, as you can see in the picture above. It is a story with different versions that vary even in the weak point of the giant; a feature that was in her navel and others in his forehead.

The Jacobean legend tells where today is the Rioja town of Alesón, also known as Poyo Roldán (Mount Roldan), a fierce battle between the french knight Roland and the giant Ferragut took place, which at that time was lord of the castle of Najera. It is said that Roldan started with their Christian knights to Santiago to complete his pilgrimage from a vantage point when they spotted Alesón Ferragut in his castle. The giant of Syrian origin challenged in combat Roldan, who agreed, ushering in a battle between the two sides on horseback which lasted many hours.

Ferragut strength was unmatched and more fighting seemed to have no weak point, sweeping away all the warriors who dared to face it, but nevertheless the Christian side with Roldan front resist getting his tremendous stakes. After checking the expertise and aplomb in combat Roldan, Ferragut proposed to spare his life if they stopped fighting, an offer he declined Christian, of course.

Unaware truce, both sides continued to fight for two days and two nights, until the giant strength failed him and he fell exhausted on top of Roland. The franc also exhausted and the weight of the giant crushing suddenly gentleman realized that the only weak point of Ferragut was in his omblido, so he gathered the little strength he had left to take a hidden knife and stab the giant , killing him.

Thus the legend that managed to expel Muslims from castle of Najera, making the feat Roland one of the most successful of the Way of St. James Christian knights. ¿You knew this Jacobean legend? If so, did you know this version or a different one?