Despite the fact that previously not many pilgrims stayed in Ponte Ulla and instead tended to continue the Camino to the nearby public albergue of Outeiro (also in the council of Vedra), the addition of a hostel to the albergue (in June 2013) has caused increasingly more pilgrims to use this location as an end of stage destination.

This private albergue, with 32 spaces, is that of O Cruceiro da Ulla. Also, in the surrounding area (both in Ponte Ulla and in Santa Cruz de Ribadulla) there are rural tourist houses where it is also possible to stay the night. A charming and popular place for pilgrims is Pazo de Galegos (it is indicated on the Jacobean route to Santiago), this Pazo (manor house) was owned by Antonio López Ferreiro, canon of Compostela and a promoter of the pilgrimage route.

His decisive actions led to the excavations in the cathedral, those that in the XIX century discovered the supposed remains of the apostle James and his disciples Teodoro and Anastasio.

The weather in Ponte Ulla 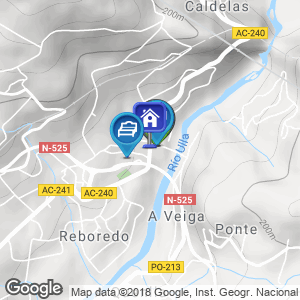