Castle of the Counts of Benavente, image from Wikimedia Commons by Contando Estrelas

Once the stage that goes from Mombuey to Puebla de Sanabria is over, perhaps the climb to the castle of the Counts of Benavente, which crowns the town, is not appealing. However, this fortress is a worthwhile visit on the Way of the Silver, since there are hardly any medieval castles preserved in Galicia. In addition to the historical and cultural character of the castle, the views of the Sierra de la Culebra are some of the best to be found.

Before the construction of this fortress in the mid-15th century, the ruins of a previous castle were preserved. The Pimentel family, counts of Benavente, built the castle on this site with military intentions due to its strategic location. From that moment on, the wars with Portugal in the 18th century and with France barely a hundred years later took their toll on this castle, leaving it practically in ruins. Once its original functions were abandoned, the castle had various uses. It was for a few years the municipal jail, and later it was degraded until it became a straw warehouse and a chicken coop.

The cultural value of the castle

In the 1990s, the perception of the castle as a historical and cultural testimony was recovered, and since then it has housed the library, the Exhibition Hall and the Assembly Hall. The castle's homage tower, known as El Macho, is the headquarters of the Fortifications Interpretation Center, where you can make an educational visit about the history of the fortress. In addition, the medieval fair of Puebla de Sanabria is organized in the square that surrounds the castle, immersing us even more in the secular legacy of the fortress.

There is no better ending to this long stage of the journey than watching the sunset from the viewpoint of the castle of the Counts of Benavente. At times like this, you feel the gratification that the road gives, although, yes, after a well-deserved rest as soon as you reach the town.

The weather in Puebla de Sanabria 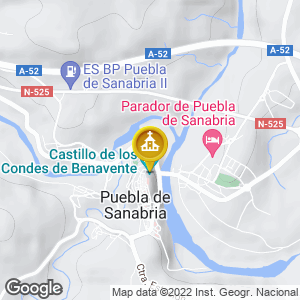