Puebla de Sanabria preserves elements from all eras in its historic center, which makes walking through it a master class in history. In the Plaza Mayor, buildings from the 12th century to other contemporary monuments are combined. One of the most striking historical complexes in the square is the one made up of the church and the hermitage of San Cayetano.

The center of attention of the historical complex

This hermitage, which serves as a chapel, is attached to the church of Nuestra Señora del Azogue, which is framed in the purest Romanesque. The church is, therefore, in a rather sober style, which contrasts with the façade of the chapel. The small adjoining hermitage almost attracts the eye more than the main building.

The hermitage of San Cayetano was built at the end of the 18th century in memory of the founder Lucas García Ossorio. Its style is easily identified with the Spanish neoclassical, thanks to its sober but balanced composition and elements such as its split pediment or the Corinthian columns. It has traces of baroque influence, typical of the time, such as the rose window with double shell decoration. It is topped with a small bell tower

If you visit the church, you should not leave this hermitage behind, which follows the relay of the church to tell the Resurrection of Christ. This cannot be seen from the outside of the chapel, but it is the central line of the church and the interior of the hermitage. Precisely for this reason it is the usual home of a carving of the Risen Christ, nicknamed by the neighbors “el Pincha Tajadas” and that goes out in procession on Easter Sunday.

The weather in Puebla de Sanabria 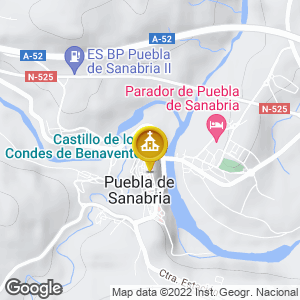