Navarra is probably one of the most important communities in the Camino de Santiago for its history and long tradition. It is nothing more and nothing less than one of the most traveled territories along the Jacobean routes, since at national level many people decide to start their adventure from this point. It also stands out for the large number of important buildings that we can find in it, being the Church of the Crucifix one of them.

In the characteristic town of Puente la Reina, we find the Church of the Crucifix, one of the best structures of Gothic architecture in Spain. It was built in the 12th century, under the name of Santa María de los Huertos, and it was not until the passing of the years that a hospital and a convent were built next to it to help all the pilgrims on their way to Santiago de Compostela.

A religious symbol for the Camino de Santiago

Although the church stands out by itself, in the apse of the Gothic nave stands out its great crucifix, which gives its name to this religious building. This crucifix stands out for its large size and its Y-shape, as well as for its historical value, since it is a work of Germanic origin. From the Church of the Crucifix also its other naves and its Romanesque portico, which is preserved from the original construction.

The weather in Puente la Reina 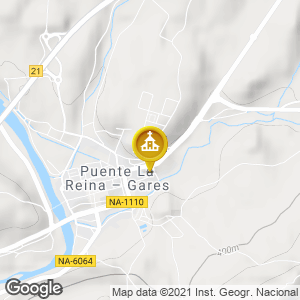