The Mataleñas is a beautiful path that runs parallel to the Cantabrian coast and takes us from the Sardinero beach to the Cabo Mayor Lighthouse, filling all our senses with blue, green and brown tones. This tower located north of Santander is also one of the most visited tourist attractions in the Cantabrian capital, as it is part of some historical events of great national importance.

The Cabo Mayor Lighthouse, also known as Bellavista Lighthouse, was built by Royal Order in 1833. The coastal monument we know today was inaugurated six years later, remaining intact for almost two centuries. In the same place, there was a dominant and privileged observation point from which signals were sent to the ships during the day with flags, and at night with fire.

The Cabo Mayor Lighthouse houses a museum with exhibits inspired by the sea.

The Bellavista lighthouse in Santander has played the role of signaling the way to all those who sail the sea since 1839. With lighthouse keepers no longer in charge of guarding and watching over the tower, much of the building has been transformed into the Cabo Mayor Lighthouse Art Center, a museum that houses the Sanz-Villar collection and temporary exhibitions inspired by a wide variety of sea-inspired works.

In 1941 a granite cross was erected to commemorate numerous murders during the Spanish Civil War, as a community of Trappist monks from the Abbey of Santa Maria de Viaceli and others were thrown into the cliffs in the area. This monument was recently modified in accordance with the Law of Historical Memory, and the slogans and coats of arms on it were removed. 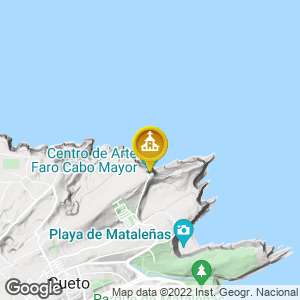