The Obradoiro, the pilgrimage center of Santiago de Compostela

The monumental center of Santiago de Compostela witnesses the history of an ancient city: Plaza del Obradoiro (a word that describes the work place of the craftsmen) is one of the most beautiful and renowned squares in Spain and the monumental center of the An ancient city of Santiago de Compostela. It comprises several emblematic buildings of the city, spectators of exception its long history, that fuse different architectural styles of various epochs, such as Baroque, Gothic, Renaissance or neoclassic, collecting the cultural legacy of more than 700 years of history.

The buildings that delimit precisely this Square of the Obradoiro are the Palace of Rajoy, that closes for its western part just in front of the main facade of the Cathedral of Santiago (the most photographed image of the city); The Hostal de los Reyes Católicos and finally the San Jerónimo College, now the seat of the rectorate of the University of Santiago. The four emblematic buildings of this square have a meaning that transcends time and even today is fully valid. They are based on the four pillars of the Galician capital: religion, attention to the pilgrim, public administration and university education. Even today these buildings continue to perform these four functions in the day-to-day compostelano of the 21st century.

The Plaza del Obradoiro also has a very deep symbolism as it is the end of the Camino de Santiago for most of the pilgrims, hundreds of kilometers behind them; The arrival box after a long trip to Santiago. Entering from Obradoiro Square to Santiago Cathedral through the Portico de la Gloria, Maestro Mateo is one of the most awaited experiences for all pilgrims, a ritual that has been fulfilled every day for hundreds of years by millions of pilgrims coming from All over the world. The Obradoiro is a place of joy and incessant hustle and bustle, both of the pilgrims who finally reach their goal and of the numerous groups that come to Santiago to visit its imposing monumental heritage.

The squares of Platerías, to the south; Azabachería, to the north and A Quintana to the east, accompany the Plaza del Obradoiro in the task of surrounding the Cathedral of Santiago giving place to an architectural and cultural environment not to be missed if you visit Santiago de Compostela. Today hundreds of people travel around this area, being already an icon the backpacks stacked of the walkers who arrive exhausted to the city after their pilgrimage, stacked in the arcades of the Palace of Rajoy. 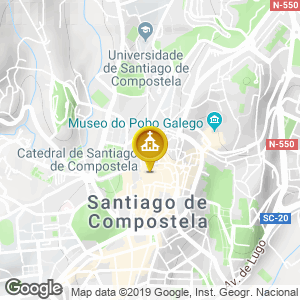