Church of Saint Mary of Vilabade, picture of Wikimedia Commons by Pilladooo

The so-called “cathedral of Castroverde” is actually the church of Santa María de Vilabade, a small parish three kilometers from Castroverde. It is located on the Primitive Way, although not all pilgrims pass through here, because there are two routes to complete the stage that goes from O Cádavo to Castroverde. However, it is worth choosing this route to visit this eclectic church.

Although the documented date of its foundation is in the 15th century, it was actually a refoundation of the previous temple, from the 13th century. A convent founded by San Francis of Asissi in 1214, when he was returning to Oviedo from his pilgrimage to Santiago, was located on that site, but which deteriorated due to the lack of funds to maintain it. The friars of that original convent left the monastery, which is not preserved, and left the church to move to Lugo. The construction of the refoundation belongs to the Gothic period, but several reforms were carried out in which baroque and neoclassical architectural elements were included.

The architectural elements of the different reforms

The apse still retains its original structure, with its ribbed vaults and slightly pointed arches, although the rest of the building is supported by a barrel vault. At the entrance to the church there is an inscription that testifies to its foundation in 1457, and it is, together with the apse, one of the few elements that testify to the Gothic style in which the church was founded.
The façade is a clear example of neoclassical architecture, with five semicircular arches and its sober triangular pediment supported by pilasters. It is accessed through a staircase that gives access to the portico, also a remnant of the Gothic construction. Inside, the altarpiece is a paradigm of Baroque art, and shows an image of Santiago Matamoros. In addition, the remains of some frescoes from an undetermined period and an uncertain reason are preserved, but they are deteriorated by humidity.
This church has passed through the hands of several owners, the first being the Franciscan congregation. When it was founded in the 15th century, it was thanks to an investment by Fernando de Castro, and his coat of arms can be found on the corners of the portico. A few years later the town hall of Lugo obtained its property after a lawsuit, and in the 16th century Bishop Osorio included his coat of arms in the tympanum of the pediment. In 1760 Osorio's descendants built the Pazo de Vilabade next to the church, creating a unique complex. Since 1979 it has been considered a National Artistic Monument and an Asset of Cultural Interest, making it a worthwhile stop.

The weather in Castroverde 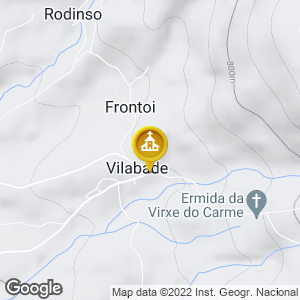