All the festivals that are found in the different municipalities of the Camino de Santiago are very special, since each year they have become more famous due to the large number of travelers who travel the routes 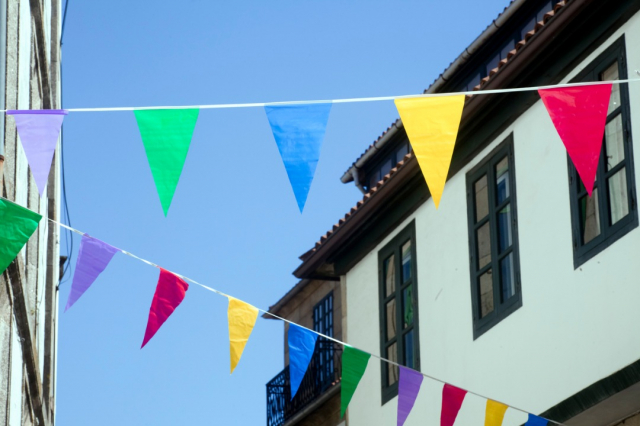 The pilgrims who make the Camino de Santiago will be able to enjoy all the gastronomy, monuments and culture that each municipality offers to visitors. If we do a good planning for the Camino de Santiago, when we arrive at the different locations we can discover the festivals that make up the routes of the main roads.

All the festivities that are found on the route are very special, since each year they have become more famous due to the large number of travelers who travel the routes. Throughout the year we can find different festivals in the municipalities through which the Camino de Santiago passes. It is true that the summer months usually host the largest number of celebrations, however, they can also be celebrated in other months of the year.

There is no doubt that the influence of the Camino de Santiago has left its mark. Today many enclaves have as patrons Santiago, María Magdalena, San Roque, etc., to whom they dedicate their festivities. The festivities on the Camino de Santiago are moments to enjoy and learn about the cultural and gastronomic traditions of each town at the same time. Here we leave you a list with the most important ones held in the months of July and August! 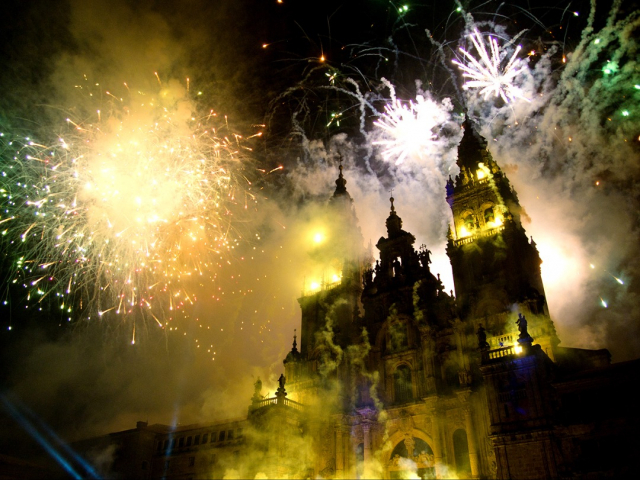 This festival revives the arrival in this medieval city of the Grand Master of the Templar Order. There are re-enactments of medieval dances and an authentic Templar dinner, for which you must be dressed in period costume.

This festival is also complemented by a medieval market and a Templar encampment.

This is one of the best-known celebrations in Spain, when for a week the capital of Navarre fills with people dressed in white with red scarves tied around their necks, who attend the multitude of activities on offer around the city. The festivities begin with the Chupinazo and end with the joint singing of Pobre de mí, both held in the Plaza del Ayuntamiento.

These festivities are celebrated all over Galicia and also in other parts of Spain. They are held in honour of the Virgen del Carmen, who is the patron saint of sailors, so you can find them in many coastal towns along the Portuguese Coastal Route, the Way of the Sea or the Finisterre and Muxía routes.

In all of them there are pilgrimages and gastronomic fairs that all pilgrims can enjoy.

This is a pilgrimage in honour of San Benito (or San Bieito), the advocate of skin ailments, which is held in the monastery of the same name in the city of Pontevedra. In addition to the religious celebration, there are also traditional music shows and open-air dances.

Festival of Astures and Romans (Astorga)

This is a historical festival that recreates the founding of the Roman city of Astúrica Augusta and the Asturcantabrian wars, which is partly didactic in nature and aims to show what life was like back then.

During the festival, an Asturian-Roman camp is set up in which pilgrims on the French Route can spend a day as if they were at the time of the Roman Conquest, eat from the stalls and buy handicrafts. 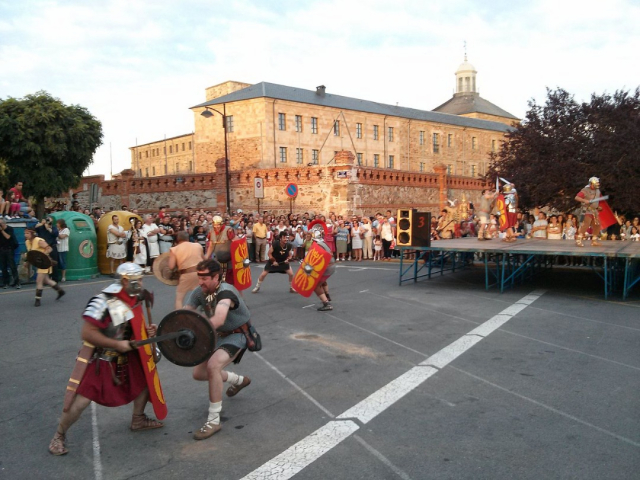 Festivals on the Pilgrims Route to Santiago de Compostela in August

Festivities of María Pita (A Coruña)

The festivities of María Pita are celebrated throughout the month of August in the Galician city of A Coruña, a city which, together with Ferrol, is the starting point of the English Way.

The city celebrates its festivities in honour of the city's heroine, María Pita. Here you can enjoy a large number of concerts, craft fairs and many other activities. In fact, it has one of the largest and most important book fairs in Galicia.

The Fiestas de la Peregrina take place at the beginning of August. They are the most important festivities in Pontevedra, with activities for people of all ages: exhibitions, theatre, concerts, fireworks, etc.

The festivities could not miss the gastronomic celebrations. The Longueirón festival is an example of these rich festivities.  It is celebrated the first weekend of August in Fisterra.

For all those pilgrims who are doing the Way to Fisterra, it is the perfect moment to taste the famous razor clams, the typical food of this celebration. 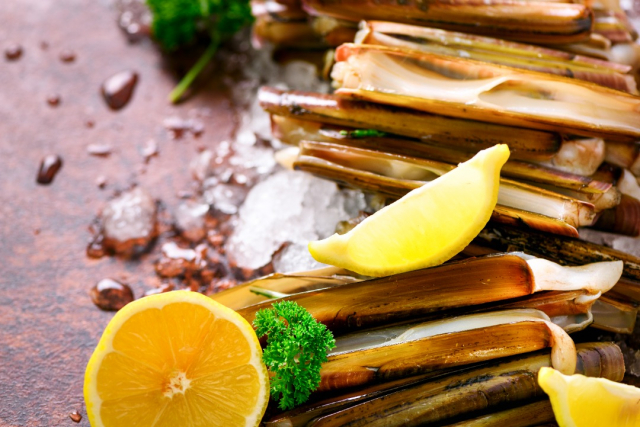 Have you ever heard of the pepper of Padrón? It is a typical variety of Padrón, whose origin dates back to the 16th century. Here you will have the opportunity to taste them! The Pimiento de Herbón festivities are exclusively dedicated to Padrón peppers. At this festival, which has been held since 1978, you can enjoy good music and good food.

On the French Way you will reach the town council of Estella/Lizarra. At the beginning of August it celebrates its patron saint's festivities, where you can eat and dance for a whole week!

Following the English Way, you will pass through the pretty coastal town of Pontedeume. At the beginning of August, it hosts the International Folklore Festival. Here you can see all kinds of dances, including regional dances and other types in colourful costumes. Pontedeume also hosts a summer carnival very close to this date.

The classic hospitable town of Sahagún celebrates a festival on 15 August in honour of all tourists. If you like this type of celebration, in Baiona (Portuguese Way along the coast) it is celebrated on 23 August, the Festa do Turista.

The Romería da Nossa Senhora da Agonia is held in the coastal town of Viana do Castelo. If you want to get to know the traditional Portuguese dance and its pilgrimage, you can do so at the end of August. Without a doubt, this is the perfect festival to introduce you to Portuguese culture.

Astorga is a city famous for its cathedral, chocolates and mantecados. On the French Route you will find this town, which celebrates a festival in honour of Santa Marta on 25 August. A perfect opportunity to spend a few nights and enjoy all that Astorga has to offer visitors.

On the French Route is the famous town of Carrión de los Condes. Known for its incredible San Zoilo monastery. At the end of August, you will enjoy this festival in which the town pays homage to its patron saint, San Zoilo.

O Pino is a small village on the outskirts of Santiago de Compostela. One of its characteristics is that it has hosted a horse fair for many years. In early August, O Pino holds a Celtic-inspired market, which you can see if you come to the city via the French Way.

Silleda is located on the last stage of the Silver Route. Although this town holds numerous gastronomic festivals throughout the year, the first Friday in August is dedicated to potato omelette!

If you liked it, take note, as on the third weekend of the month they repeat the festivity with Galician empanada. 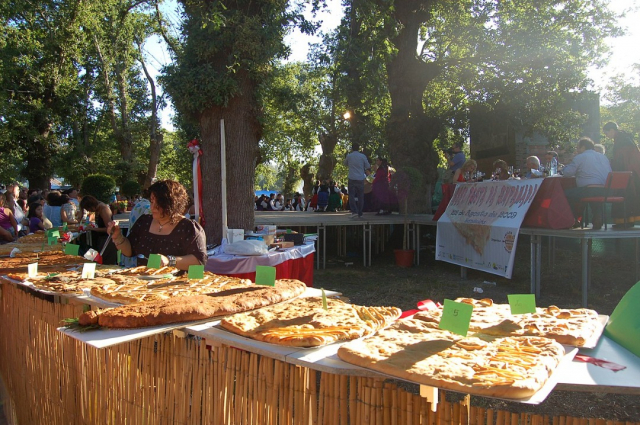 Arzúa is on the French Way, on the last 100 km. Here you can see the "Festa dos Botes" celebration, dedicated to the young people of the town. It takes place at the beginning of August and features traditional games and music.

San Roque is one of the most popular celebrations in Galicia, and not only here, but also in other parts of Spain. A good example of this celebration can be found in Melide, on the French Way. During this festivity you can taste the famous octopus of A Garnacha and dance in the town square.