If you are doing the Camino del Norte, also called Camino de la Costa, you will find one of the best urban beaches in all of Spain: San Lorenzo beach. One of the most traditional and busiest in Asturias. And not only that, but also one of the most beautiful in northern Spain.

Located in the center of Gijón, it is bordered to the west by the Santa Catalina Hill and to the east by the mouth of the Piles River. It has a total of a kilometer and a half in length, on which bathers take the opportunity to walk through its fine golden sand.

A well-known beach in Spain

This point of tourist interest won several awards. In the summer of 2010, the ''Ecoplayas'' flag was hoisted for the first time, getting it again in 2011. Year in which it also achieved the ''Q'' of Tourism Quality. Without a doubt, an excellent point of interest for every pilgrim who is doing the Camino de Santiago.

The weather in Gijón 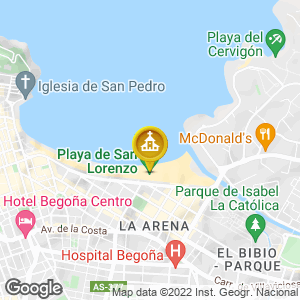