Legends of the Camino de Santiago: Source Reniega in Navarra

It takes place in the Sierra del Perdon, a set of mountains located in Navarra, about 10 km south of Pamplona

There is no more related to the mystery and legends that Galicia in Spain a land always related to the paranormal, witches and, of course, myths place. Those stories, having no plausible explanation for the time, are decorated in such a way that only the inexplicable can make sense. But, of course, the Camino de Santiago is, so to speak, an extension of Galicia throughout Spain. A branch road followed by thousands of pilgrims and has lots of legends like Galicia, community where it ends. 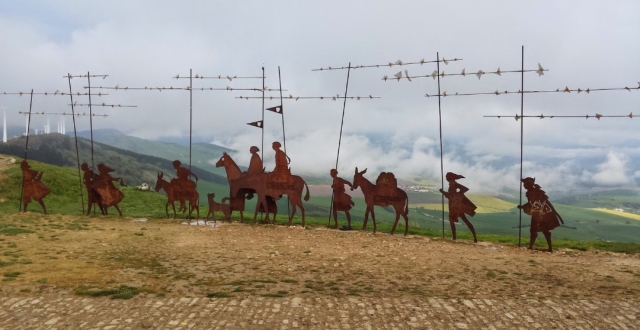 Usually the Camino de Santiago legends are related to the religious route itself and, of course, any kind of place or monument surrounding it. This is the case of the so-called Sierra del Perdon, a set of mountains located in Navarra, about 10 km south of Pamplona, capital of the community, and between Arga, Burglary and Elorza rivers. Zariquiegui through the Camino de Santiago is one of the biggest tourist attractions in the area, he said saw through on their way to the town of Puente la Reina. In this area pilgrims can find a stand in honor of the Virgin of Forgiveness remains of an ancient chapel and a monument made of sheet Vicente Galbete representing a procession of pilgrims from different eras.

In the bottom of the mountain known you can find a small fountain that has long been known as Source Reniega (although at present it is known by another name); the protagonist of our story.

According to legend, in the place of this source the Devil appeared in the form of a handsome young man. A tired and thirsty pilgrim, walking along the road to the town of Puente la Reina, crossed with the Devil as young. This offered a drink of fresh water in exchange for this pilgrim disown God. However, the faith of the pilgrim was greater than the desire to drink, so he rejected the offer.

The demon wanted to lose a step, and try again with water, but this time had to disown the Virgin Mary. However, the young pilgrim again denied. The Devil, incessant, this time offered him a drink of water by simply denying the Apostle Santiago. This time the pilgrim rejected the offer, and also prayed from heaven help him.

Legend has it that the faith of the pilgrim caused the Devil disappeared behind a cloud of sulfur, and appeared to dissipate the famous Fountain Reniega. Another version of the legend tells that the third negative Pilgrim, the Devil disappeared and the Apostle James himself guided the pilgrim to a source of fresh water, we know today as Source Reniega, giving the drink with his own scallop.

Therefore, if you do this route in Navarre, do not hesitate to visit and perhaps a break from grueling road at source, which you can see in previous catches. Do you know any legend Camino de Santiago? Any interesting of Galicia? Do not hesitate to share with us in the comments or via the forum.