The Cross of Santiago: Its origin and meaning

The Cross of Santiago is part of the most recognized symbols of the Camino de Santiago, which has a whole historical legacy related to the Jacobean culture

Redacción
0 0
Índice
The Camino de Santiago is full of Jacobean symbols. Among the most important ones are the pilgrim's shell, the yellow arrows, the botafumeiro, etc. The Cross of Santiago is part of the symbols of
the Camino de Santiago, which has a whole historical legacy related to the Jacobean culture.
The Cross of Santiago stands out for its cross and sword shape. Also for its striking red color, symbolizing the blood shed by the Apostle Santiago. Since its origin it has been linked to the Order of the Knights of Santiago, and today it is represented in numerous elements such as the coat of arms of the city of Compostela, even the typical Santiago cake.

What is the symbol of the apostle Santiago?

Although there are many symbols that we can relate to the Camino de Santiago, the symbol of the cross is the one most closely linked to the apostle Santiago. Known worldwide as the Cross of Santiago, it is a Latin cross with a shape very similar to a sword but with two fleur-de-lis finials on the top and a panela on the hilt.
In addition to its characteristic shape, another of the most representative factors of this cross is its red color. It is said that this color was included to represent the blood spilled by the Apostle Santiago due to his death by decapitation by order of King Herod Agrippa in the year 44. 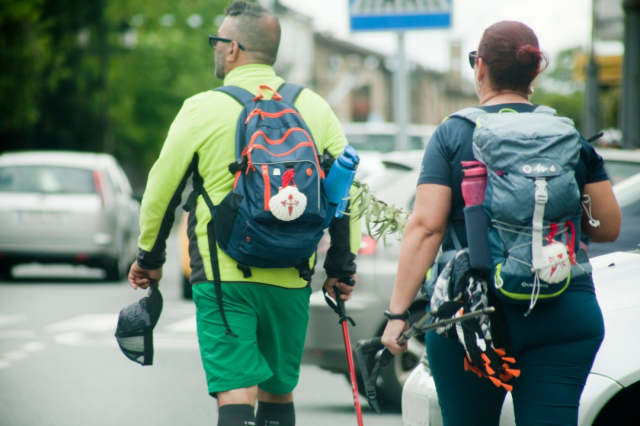 Origin of the Cross of Santiago

The Cross of Santiago had its origin with the foundation of the Order of the Knights of Santiago in 1170, since it was its distinctive symbol. Its name comes from the Apostle Santiago, the patron saint of Spain. The Order of Santiago's objectives were to protect pilgrims along the Camino de Santiago and to provide them with shelter, food and spiritual help. In addition, they were also in charge of pushing back the Muslims in the peninsula while defending the Christian troops.
In 1175, Pope Alexander III approved the rules of the Order which included the adoption of the red cross as a symbol of identification of the Order of Santiago. Eventually, the cross was introduced as a symbol in the form of a sword and an invocation of its vow to the Apostle St. James.
There are several theories as to why the Order of Santiago adopted the red cross. One of them assures that it is necessary to go back to the year 844, during the Battle of Clavijo. Legend has it that in this battle of Moors and Christians, the Apostle Santiago appeared on a white horse carrying a white flag with a red cross and helped the Christians.  Others look for the origin in the Crusades, where the knights carried small crosses with a sharpened lower part to anchor them to the ground.

What does the Cross of Santiago mean?

As mentioned before, the Cross of Santiago is a well-recognized symbol that is shaped like a cross and sword and is bathed in a strong red color. On the arms and on the hilt is depicted the fleur-de-lis, a common symbol of the Middle Ages that alludes to the honor of knights.
Just as there are several theories about the reason for the adoption of the red cross by the Order of Santiago, there are also several theories about its meaning. The most widespread theory says that its double condition of cross and sword symbolizes on the one hand the defense of faith in Christ, and on the other, the use of weapons to defend the faith and the instrument used to decapitate the Apostle. As for the red color, there is no doubt that it represents the blood shed by the Apostle James during his martyrdom in Jerusalem. And also, the blood shed by the Christian army in defense of the faith. 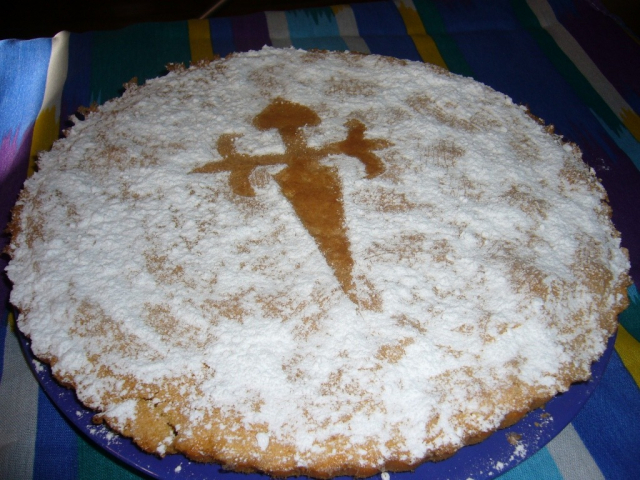 The Cross of St. James today

Today we can find the Cross of St. James in a great variety of places. In the picture of Las Meninas painted by Diego Velázquez, the author portrayed himself wearing the Cross of Santiago on his chest, since he had received the title of knight of the Order of Santiago. Therefore, there is no doubt that it is a very typical element in Galicia and in other territories through which the Camino runs. We can also see it in many heraldic coats of arms in Spain and even in cultural and sports associations, as is the case of Celta de Vigo.
In another of the places where we can find this cross today, is in the cake of Santiago. This well-known dessert is decorated on top with powdered sugar, except in the central part where the silhouette of the Cross of Santiago is usually drawn.
Activity