On the Atlantic coast of the province of A Coruña, we can find different emblematic places among which stands out the Touriñán cape. This cape is located in the town of Muxía and has the merit of being the westernmost point of Galicia and the entire peninsular territory of Spain. In relation to Europe it is the second most western point only below Cabo da Roca in Portugal.
Also known as Cabo de Touriñán, it is an emblematic point of Galicia. Thanks to its peninsular shape it penetrates up to 1 kilometer into the Atlantic Ocean, offering a unique perspective of the Galician coast. Its width has a total of 150 meters in which we can find the Lighthouse of Touriñan, located almost at the western end.
Anyone who visits Cape Touriñán will be able to witness a unique panoramic view of the Atlantic Ocean. From this point we can observe how the ocean merges with different rock erosions, offering an impressive view of the Galician coast. In the west of the cape we can even find an islet, the result of the continuous deformation of the water on impact with the land.
Photos & videos
Activity 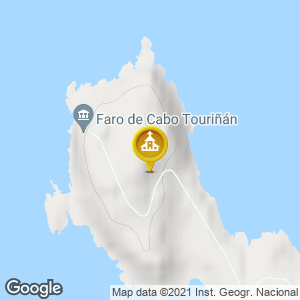