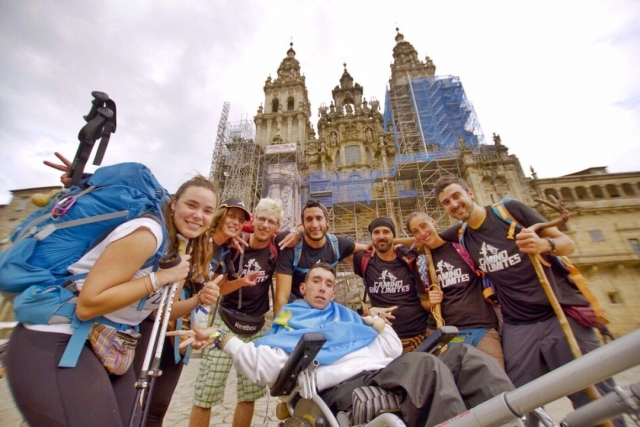 The solidarity trip of brothers Oliver and Junlu concluded on Sunday October 23 at Plaza del Obradoiro in Santiago de Compostela, after 37 grueling stages and many experiences since they began walking in Roncesvalles on 13 September. Oliver and Juan Luis, with 96% disability caused by cerebral palsy, have come since the 800 kilometers between the start of the road to Santiado de Compostela in wheelchairs and were greeted by family and friends in Santiago, where there have been scenes of joy and great excitement to complete this great trial.

The reason for this adventure is to vindicate the accessible roads without limits for any pilgrim, regardless of their physical condition in the Camino de Santiago, as well as serving as an inspiration for people with disabilities, making an effort to achieve greater social inclusion of these people and ultimately, a world more accessible and equal opportunities for all. Through its project, Camino Sin Límites, have managed to pull all the barriers that have put them ahead, videotaping all the way and sharing it with us through social networks.

Part of the funds raised from this initiative will go to the Asociación Accesibilidad para Todos “La Ciudad Accesible”, which Juan Luis is one of its greatest activists fighting for the rights of people with disabilities and more accessible environments.